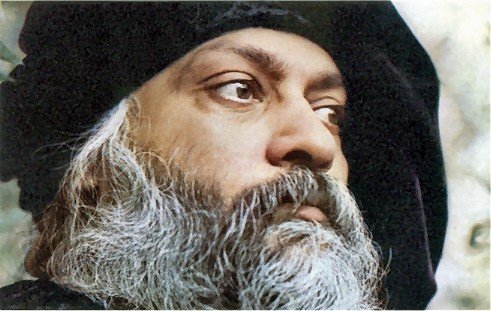 Another thing I would like to explain is that this sannyas is not bound to any religion. On this earth every type of sannyas has been part and parcel of a particular religion, a particular sect. That too is is a part of a security measure. You renounce, yet you belong. You say, “I have left the society,” yet you belong to the sect. You go on being a Hindu, a
Moslem or a Sikh. You go on being something. Really, sannyas means to be religious and not to be bound to any religion. Again, it is a great jump into the unknown. Religions are known, but religion is the unknown. A sect has systems, religion has no system. A sect has scriptures; religion has only existence, no scriptures. This sannyas is existential, religious, nonsectarian.

That does not mean that this sannyas will deny a Mohammedan Mohammedanism, that this sannyas will deny a Christian Christianity — no! It means, really, quite the reverse. It means it will give the Christians the real Christianity. It will give the Hindu the real Hinduism, because the deeper you go into the Hindu religion, ultimately the Hinduism will drop and you will find religiousness only. The deeper you go into Christianity, the less it will be like Christianity and the more like religion. At once, you reach to the center of the religion.

So when I say by becoming a sannyasin you belong to no religion as such, I do not mean that you are denying Christianity or Hinduism or Jainism. You are only denying the dead part that has become burdensome in religion. You are only denying the dead tradition, and you are uncovering and discovering again the living current, the living current behind all the dead — dead traditions, dead scriptures, dead gurudoms, dead churches.

You are again finding the living current. It is always there but it is always to be rediscovered; each one has to discover it again. It cannot be transferred, it cannot be transmitted. No one can give it to you. Whatever has been given will be dead. You will have to dig it deep within yourself, otherwise you never find it. So I am not giving you a religion, I am giving you only the push to find the living current. It will be your own finding, and it can never be anyone else’s. So I am not transmitting anything to you.

There is a parable…. Buddha comes one day with a flower in his hand. He is to give a sermon, but he remains silent. Those who have come to listen to him begin to wonder what he is doing. Time is passing. It has never happened like this — what is he doing? They wonder whether he is going to speak or not. Then someone asks, “What are you doing? Have you forgotten that we have come to listen to you?”

No one has heard it. But one disciple — a very unknown disciple, known here for the first time, a bhikkhu named Mahakashyapa — laughs heartily. Buddha says, “Mahakashyapa, come to me. I give you this flower, and I declare that all that could be given through words I have given to you all. That which is really meaningful, which cannot be given
through words, I give to Mahakashyapa.”

So Zen tradition has been asking again and again, “But what was transmitted to Mahakashyap?” — a transmission without words. What has Buddha said? What has Mahakashyapa heard? And whenever there is someone who knows, he laughs again, and the story remains a mystery. When someone understands, he laughs again. Wherever there are persons who are scholars, who know much and who know nothing, they will discuss what has been told, they will decide about what has been heard. But someone who knows will laugh.

“Yes,” Bankei said. “Yes, nothing was said; nothing was heard. It was said, and it was
heard. I am a witness.”
So someone said, “You were not there.”

So Bankei said, “I need not have been there. When nothing was communicated, no one is needed to be a witness. I was not there, and yet I am a witness.” Someone laughed, and Bankei said, “He was also a witness.”

The living current cannot be communicated. It is always there, but you have to go to it. It is nearby, just by the corner. It is in you, you are the living current. But you have never been in. Your attention has always been out, you have been out-oriented. You have become fixed. Your focus has become deadly fixed, so you cannot conceive of what it means to be in. Even when you try to be in, you just close your eyes and go on being out.

Source – Osho Book “I am The Gate”