Osho – To be in the Mind, to be identified with the mind, is Unawareness 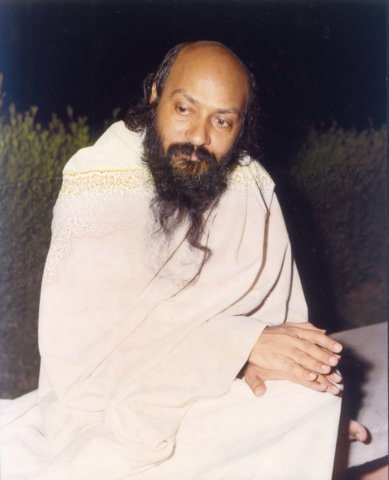 Question – Beloved Master, What is Unawareness?

The Sufi gave him his ring and told him, “There is a message. Whenever you are really in need, in a real emergency, just open the ring, take up the diamond, and inside you will find the message — but not out of curiosity, only when there is real danger which you cannot face on your own and you need me, you can see the message.”

Many times the king became curious what is in there, but he resisted his temptation: he had given his promise, his word. He was a man of his word.

After ten years he was attacked and defeated. He ran away into the forest, into the mountains, and the enemy was following him. He could hear the horses coming closer and closer — it was death coming closer. They would kill him!

But he was going as fast as he could on his horse. Tired he was, tired was his horse; wounded he was, wounded was his horse. And then suddenly he came to a cul-de-sac. The way ended; there was an abyss. And there was no possibility of turning back because the enemy was closing in, at every moment coming closer. He could not take the jump into the abyss; that was sure death. Except for waiting there was nothing to do.

And it happened exactly like that. He was hearing those noises coming closer; by and by he started hearing them going farther away. They had taken a wrong turn. He had passed a crossroad, they must have moved on some other road. Then he gathered his armies, fought the enemies again, won back his kingdom. He was received with great joy, garlanded, flowers showered, the whole capitol decorated for his welcome.

Suddenly he felt great ego arising in him. Again he remembered the message, “This too will pass away,” and the ego disappeared. And all those garlands and all that welcome became just a child’s play. In failure it helped, in success it helped. That became his meditation, that became his mantra. So whatsoever would come he would repeat deep down — not verbally, but the feeling would be there in his heart — “This too will pass away.”

If you can remember it, then whatsoever comes into your mind you remain simply a witness: “This too will pass away.” That witnessing is awareness — but we are identified. We become greed, we become anger, we become lust. Whatsoever comes in front of our consciousness, we become identified with it. It is as foolish as when it happens to very small children.

Have you tried it? Just put a mirror before a very small child. He will look in the mirror very surprised, with wide open eyes he will look: “Who is this fellow?” He will try to catch hold, but he cannot catch hold of the person. And then, if the child is intelligent, he will try to go to the back of the mirror: “Maybe the child is hiding behind the mirror.” He is not yet aware that it is only a mirror; there is no reality.

Mind is only a mirror: it reflects the clouds of the world, it reflects all that happens around in the world. Somebody insults and there is anger — it is a reflection. Somebody beautiful passes by and it reflects — it is lust. And you immediately become identified with it.

Keep a little distance… and slowly slowly, you will find that the distance goes on growing. One day the mind is so far far away, it does not affect you at all. This is coming home, this is buddhahood. AES DHAMMO SANANTANO: this is the inexhaustible law of life. If you can be a witness you will be able to pass through a great transformation: you will know your real self.

The old maid sat stroking the head of her pet tomcat and worrying about what she had missed all her life, when all at once, a fairy appeared with her wand and told the old maid she was ready to give her any three wishes she might make. The fairy asked that she not get excited but take her time and decide on her wants carefully.

Her first wish was that she might have a beautiful body. The wand was waved and her wish granted. When she examined the result in the mirror, her second wish was immediate: that she be given clothing to drape this wonderful figure. Her wish was again fulfilled with racks of beautiful clothes made to fit perfectly.

When asked for the third wish, she said she wanted a man.
Said the fairy, “You have a beautiful cat there. How about making a man out of him for you?”

The really religious person never asks anything from God. He says, “Thy will be done, thy kingdom come. Because what can I ask out of my unawareness? Whatsoever I ask is going to be wrong.” He asks only one thing: “Thy will be done.”