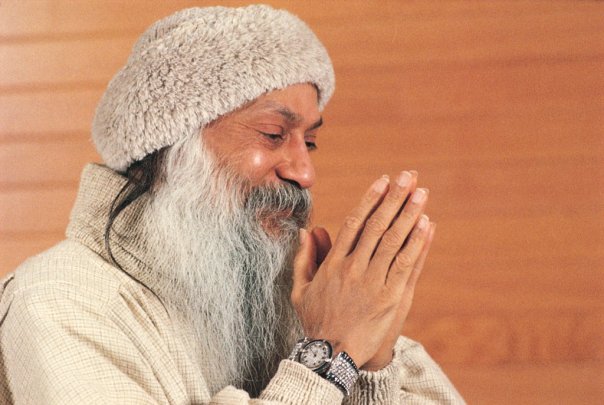 Osho – Anand Buddha, even if you are aware of that, that will do. Are you aware of choiceless unawareness? That will destroy that choiceless unawareness. Make it an object of awareness and it will disappear, evaporate. And no marks can be given for it, because if marks have to be given for it then everybody will succeed in getting marks — everybody, because everybody is living it.

A huge bully sauntered into the dimly lit saloon. “Is there anybody here called Kilroy?” he snarled. Nobody answered. Again he sneered, “Is there anybody here called Kilroy?”
There was a moment of silence and then a little Irishman stepped forward. “I am Kilroy,” he said.
The tough guy picked him up and threw him across the bar. Then he punched him in the jaw, kicked him, slapped him around and walked out.
About fifteen minutes later the little fellow came to. “Boy, didn’t I fool him,” he said. “I ain’t Kilroy!”

A pretty young girl stretched out on the psychiatrist’s couch. “I just can’t help myself, Doctor. No matter how hard I try to resist, I bring five or six men with me into my bedroom every night. Last night there were ten. I just feel so miserable, I don’t know what to do.”
In understanding tones the doctor rumbled, “Yes, I know, I know, my dear.”
“Ah!” the surprised girl exclaimed. “Were you there last night too?”

People are living in unconsciousness, doing all kinds of things in unconsciousness. Everybody is an unconscious robot. We are just pretending that we are conscious; we are not conscious.
The moment you become conscious, all unconscious actions disappear from your life. Your life starts moving in a new dimension. Your each act comes out of inner clarity; your each response is virtuous, is virtue.

It will be good if we start calling Christ “Joshua the Buddha.” His real name was Joshua; from Joshua has come Jesus. And ‘christ’ has become ugly because of the Christian church; the word has lost its beauty. It will be good if we change, if we start calling him Joshua the Buddha — because they are all buddhas, they are all awakened people. They live through inner light. You only grope in inner darkness.

Anand Buddha, I have given you the name Buddha. If you feel you are living in choiceless unawareness, make it a point to be aware of it.

A thief asked a great Buddhist mystic, Nagarjuna, “Can I meditate and still remain a thief?”
Nagarjuna said, “Yes. Just do one thing: while you are stealing remain alert, aware, conscious.”
The thief was very happy. He said, “You are the right master! I have gone to many people, and they all say, ‘First stop stealing, then you can be a meditator.'”

Nagarjuna said, “Those are not masters — they must be ex-thieves. I am a master. I am concerned with meditation, not with other things. What you do is YOUR business; whether you steal or donate, that is your business. My business is to tell you to be alert, and do whatsoever you want to do.”

Of course the thief was very happy — happy because now he could have both worlds. But after fifteen days he came back, fell at the feet of Nagarjuna, and he said, “You are a very sly fellow! You destroyed my whole profession — because if I try to be alert I cannot steal; my hands simply won’t move. Last night I entered into the king’s palace; this was such an opportunity that it happens only once in a lifetime. It was very difficult to enter — my whole life I have tried — but it must be because of your blessings: last light I entered, and all the guards were fast asleep. I opened the treasure and such precious diamonds I have never seen in my life! I could have become the richest man, and everything was within my grasp, but you were standing between me and the treasure. You were telling me, ‘Be aware!’ You were shouting at me, ‘Be aware!’ And if I tried awareness, those precious stones looked just like stones, not worth bothering about. If I forgot about awareness, they were again precious stones, tremendously valuable.

Nagarjuna must have been a man like me; otherwise, ordinary teachers can’t accept a thief.
Sometimes a drunkard comes to me and he says, “I am a drunkard. Can I also be a sannyasin?”
I say, “Don’t be bothered about small things. Sannyas will do! You first be a sannyasin, then we will see.”
He seems to be puzzled, he can’t understand. But once he becomes a sannyasin, things start changing. Sooner or later he comes and reports that “You did the trick. I cannot drink anymore; it has become more and more impossible. It is so repulsive, disgusting.”

One drunkard told me — he has become a sannyasin just a few months ago — he said, “It has become so difficult. Now I know the strategy and the trick behind these orange clothes, because when I go to the pub people start touching my feet! They say, ‘Swamiji, this is a pub! You must have come thinking it is some other place.’ And I say, ‘Yes — is this a pub?’ And I have to turn back! I can’t even go in.” He was really angry at me; he said, “I can’t even go to the movie, because standing in the queue people start touching my feet, and they say, ‘Swamiji, what are you doing here?’ And I have to escape!”