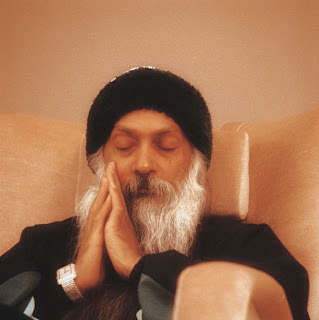 [A sannyasin couple with two children ask for help with their relationship because the man loves the woman but she feels so repressed she cannot give much love to her husband.]

You can be loving only if you also allow your hate to surface. They are together: if you repress hate, love will be repressed; you cannot separate them. That is one of the most significant things to understand, and man has suffered much because of that misunderstanding. We have been told that love and hate can be separated.

They cannot be separated, they are two sides of the same coin. Hidden behind love is hate,hidden behind compassion is anger, and so on, so forth. The polar opposite always exists with it so when you repress one, both are repressed; if you express one, both will have to be expressed. And down the ages the society has decided to repress the negative, hence the positive has disappeared. When the positive disappears life is meaningless; then there is no significance.

It is for the first time in human history that man is becoming aware of this phenomenon: that the hate part also needs to be accepted, that it has also to be welcomed, that we are not to reject it in any way. We have to understand that once the negative is allowed the positive will surface.

(To the man) She has repressed the negative. And women are more repressive about the negative because they have been told to have a better demeanour, a better, more graceful personality. Men are allowed a little bit: if they are angry and they shout, it’s okay; but the woman should not shout, she should not be angry, she should not use swear-words, mm? – that is not womanly. At the most she can cry. She can be sad but not angry; man is not allowed to cry but he is allowed to be angry.

So it happens almost always that the women become less loving. In fact they have the capacity to love more than men, but because of that capacity they have all the more capacity to hate too. Once a woman loves you her love is too much; if she hates you, her hate is too much. You can neither bear her love nor her hate. Man is very lukewarm, his love is lukewarm, his hate is lukewarm, because he has many more dimensions, he has many more things in life.

Love is the whole life of the woman. Certainly because of that it has too much intensity. Humanity must have become aware of the phenomenon that if woman is allowed to hate, there will be danger, it will be fire: Repress it. Hate has been repressed; now love is being repressed.