Osho – We are the answer to the questions that are surrounding humanity. 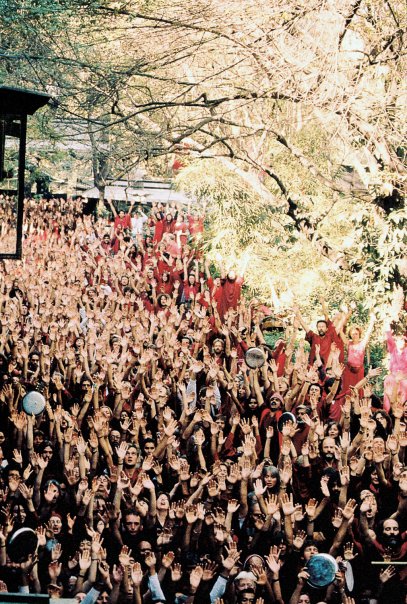 Question – Beloved Osho, i heard you say sometime ago that science is of the head and religion is of the heart. i understand that these qualities, being of a polarity, are mutually dependent. one cannot exist without the other, just as man cannot exist without both head and heart. Would not then a world scientific community bring with it, as a necessary by-product, a world religious community? Is not the vision of a world science and a world religion synthesized in your vision of the new man?

Osho – Man is not only head and heart. There is something more than both in him — his being. So you have to understand three things: the head, the heart and the being. I have said religion is of the heart, because religion is the bridge between head and being. The head cannot jump to the being directly unless it goes through the heart.

But you have to understand my difficulty. You are in the head. I cannot talk about the being because the head will not be able to communicate with the being. For the head there is no being; that’s why scientists go on denying the soul. So I have to talk to you about the heart, which is midway.

It is possible for head to understand a little bit of heart, because even the greatest scientist falls in love. His head cannot conceive what is happening — falling in love? He cannot prove it rationally, he cannot find why it happened with a particular man or with a particular woman, what the chemistry is behind it, what the physics is behind it; it seems to be something out of nowhere. But he cannot deny it either; it is there, and it is possessing his whole life.

That’s why I say religion is of the heart. That is only a temporary statement. Once I can persuade you from thinking into feeling, then I can tell you that religion is of the being. Religion is neither thinking nor feeling, it is neither logic nor emotion. It is just pure silence: in one sense utterly empty, because there is no feeling, no thinking, and in another sense overflowing with bliss, with benediction.

Meditation is the way from the head to the heart, from the heart to the being. I would like all the scientists to listen to the heart. That will change the very character of science. It won’t be in the service of death, it won’t create more and more destructive weapons. It will be in the service of life. It will create better roses, more fragrant roses; it will create better plants, better animals, better birds, better human beings.

My approach is that all these three centers should be functioning in every person, because even a single individual is a world unto himself. And these centers are in the individual, not in the society; hence, my focus is on the individual. If I can change the individual, sooner or later the world is to follow. It will have to follow, because it will see the beauty of the new man.

The new man is not only clever in arithmetic, he can also enjoy and compose music. He can dance, he can play the guitar — which is a tremendous relaxation for his head, because the head is no longer functioning. And the new man is not only of the heart; there are moments when he drops even deeper and simply is.

That source of your is-ness is the very center of your life. To touch it, to be there is to be rejuvenated. All the energies of your heart, of your head, will be tremendously multiplied, because you will be getting newer energy every day, every moment.

Right now, even a great scientist like Albert Einstein uses only fifteen percent of his potential. What to say about ordinary people? They never go beyond five to seven percent. If all the three centers are functioning together, man will be able to function totally, one hundred percent. We can really create a paradise here, on this earth. It is within our hands. Just a little effort, a little courage, and nothing more is needed.

The heart is a totally different dimension of experiencing beauty, love, and expressing it. But that is not all. Unless you reach to your very center, you will remain discontented. And a discontented man is dangerous, because he will do anything to get rid of his discontentment.

The person who knows himself and his center is the richest. In fact, that’s where the kingdom of God is. It is your kingdom, there you are a god. Deep down, centered in your being, you become an emperor. Therefore, I say to the whole world that my red empire consists only of emperors. And we have to expand the red empire as quickly and as fast as possible, because the forces of death are coming closer every moment. But I have every hope and certainty that life cannot be defeated by death.

My people are the first people in the whole of history who are life-affirmative. All other religions are life-negative. Their function is finished, they are no longer of any use. Life-affirmative people are needed. And if you are overflowing with life, it is contagious, it starts infecting other people. So wherever you are, rejoice, celebrate. Help your love, your life, your laughter to spread all over the world. It is possible. It has to be made possible. We can do it! And there is nobody else to take the responsibility. We are the only alternative. We are the answer to the questions that are surrounding humanity.