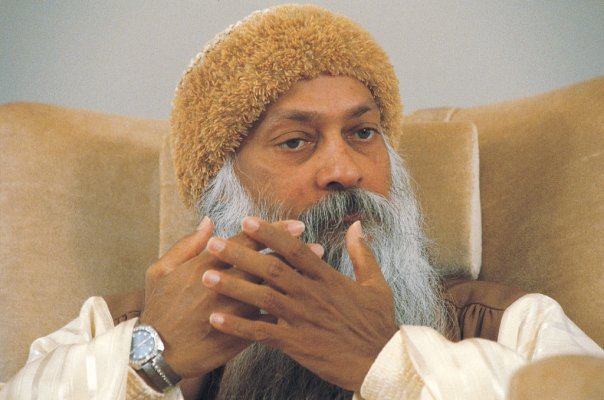 Become ordinary. That’s my teaching too, if it can be called a teaching — because up to now, teachings have been to drive you towards some extraordinary goal. But if you ask the awakened, they have always been saying: Just be ordinary.

Don’t strive. Live effortlessly, live in a let-go. And then nature takes possession of you. Your life becomes spontaneous, you live moment-to-moment — with no ideology to follow, with no conclusions. You live without conclusions; each moment brings its own reality and you respond to it. And you respond out of your total being — every cell of your body and mind and soul is involved in it.

Then you never repent — because how can you repent? You responded totally, so whatsoever happens is okay, because nothing else was possible. You had done ALL — you responded totally, you took the challenge. You can’t repent if you live spontaneously. The people who repent are the people who live through conclusions. Then one mind says “Do this”, another mind says “Do that” — because they have heard so many mahatmas and they have read so many books and they have listened to so many ideologies and so many teachers, and all those things are roaming around their minds, trying to impose themselves on the mind.

You choose one thing against something else. If you fail, then that something else which you had denied will take revenge with a vengeance. It will come back to the mind and will make you repent. It will say, “I have been telling you, choose me. And you were a fool to have chosen the other. Now remember in future.” And you take a vow: “Then now I will listen to you.” You repent.

But you have not understood yet. Repentance will always come if your decision is partial. And no decision lived out of conclusions can ever be total, because the conclusion has been carried from the past, and the situation is new — how can it fit totally? You have to respond again out of your newness of this moment, then the response is total. And total response is joy — whether it fails or succeeds, is irrelevant. In its totality it has succeeded already, and there will be no repentance.

When you feel tired you fall asleep — nobody denies it. This is truth. Truth is simple. Theories are complex and complicated. Theoreticians go on arguing, truth remains unargued.

Don’t listen to what people say, listen to what they are. And you will be surprised — there is no difference between a Hindu and a Mohammedan and a Christian and a Jew, no difference at all. They go to different churches, obviously, and they read different books, certainly — but look into their nature. When it is hot the Hindu perspires as much as the Mohammedan; that is natural. The Mohammedan cannot say, “I am not a Hindu, and Hindus are perspiring. I cannot perspire, not at least now; that will be agreeing with the Hindus.” When it is cold the body shivers — the body knows not whether it is a Christian or a Jew or a Jain; it shivers. Just watch natural things, look into nature. And slowly slowly, you will understand Dhamma — the real religion, the Law of Buddhas.