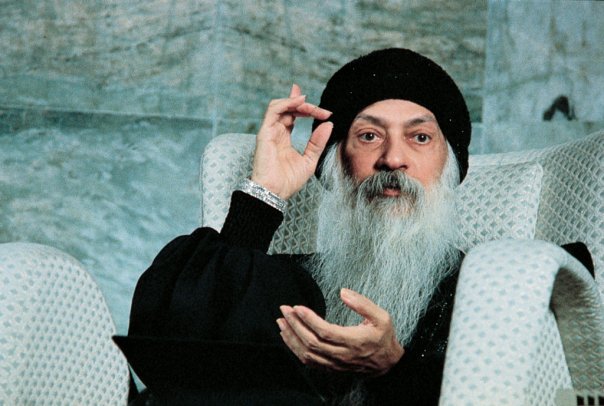 Osho – I am unable to give you the truth. If anyone says he is capable of giving it to you, you can be certain he has begun by giving you an untruth. No one has the capacity to give the truth. This is no comment on the capacity of the giver, it only shows that truth is a living thing. It is not an inanimate object that can be given or taken away. It is a living experience one must obtain by oneself.

Dead objects can be transferred from one person to another, but not experiences. Can I transfer to you the love, the experience of love that I have had? Can I give you the beauty and the music I have encountered? How I wish I could give you the joy I have experienced in such an extraordinary way in this ordinary-looking body of mine! But there is not way to do so. I feel restless and tormented about it but I can do nothing. This is such helplessness!

A friend of mine was born blind. How I wished I could transfer my sight to him but it wasn’t possible. Perhaps one day it may be possible because eyes are parts of the body and may be capable of being transplanted. But the sight that sees the truth can never be transferred no matter how strongly one might wish it. It belongs to the soul, not to the body.

Whatever is achieved in the world of the self is only achieved through self-effort. In the world of the soul, no debt, no borrowing, no depending on others is possible. Nobody can walk there on borrowed legs. There is no refuge there apart from one’s self. To attain to truth you must be your own refuge. This is the inescapable condition.

It is because of this that I said I am incapable of giving you the truth. Only words can be communicated, words that are lifeless and dead – and the truth always remains behind. And this communication of words is not real communicating at all. That which is alive – their meaning, their soul, the experience that is their essence – does not go with them. They are like empty cartridges, like bullets without gunpowder. They are like dead bodies, corpses. They can only be a burden to you; they can never liberate you. With words you only carry the corpse of truth. There is no heartbeat of truth in a corpse.

As I said, truth cannot be given. But I can be of some assistance in helping you set down this load you are carrying on your back. It is a burden you have been carrying for ages and it has become very heavy, unbearable. You must be freed from this burden of words. Just as a traveler becomes covered with dust while walking along the road it is natural that the dust of words and thoughts gathers on one during the journey through life. But you have to brush this dust off.

Words are dead things; they are not the truth. Nobody’s words are the truth. Do not collect them. Collecting them is harmful. The pilgrimage to truth cannot be made carrying this weight. Just as a climber must lay down his pack before scaling a mountain to seek the heights, one who has embarked on the journey to truth had better lay down the burden of words. Only a consciousness free of words is able to attain the lofty heights of truth.

I teach only one kind of non-possessiveness, the non-possession of words and thought. Their dead weight is making your journey very difficult. Chuang Tzu has said, ”The net is for catching fish. Catch the fish and throw away the net.” But we are such bad fishermen that we have become entangled in the nets and have forgotten about the fish. Look on your heads. You are carrying boats on your heads nad you have forgotten you are to sail in them.

Words are symbols. They are sign-pointers. They themselves are not the truth. Understand the significance of the signs and then throw them away. Collecting signs is no different from collecting corpses.
Words are like fingers pointing to the moon. A man who concentrates all his attention on the fingers misses the moon. The fingers serve their purpose if they lead you away from them. But on the contrary, they draw you to themselves, then they become not only useless but truly harmful.

Haven’t the words you have learned about truth become a source of misfortune to you already? Have they not separated you from one another, man from man? Aren’t all the stupidities and cruelties perpetrated in the name of religion because of words? Aren’t all those sects known as the various religions just based on the differences of words?

Truth is one and can only be one, but words are many, just like the moon is one while the fingers pointing to her may be a thousand and one. Those who have held on to one or more of the countless words that point to the truth are responsible for the many religious sects. These religions have not arisen from truth but from words. Truth is one. Religion too is one. Those who discard words attain to this religion alone and to this truth alone. It is without equal.

Therefore I don’t want to add to your burden of words by more talk. You are already breaking down under this heavy load of words. I see clearly that your necks are bent under their weight.

Those who have known the truth do not open their mouths at all. Their lips are sealed. Not a word is to be heard from them. Aren’t they saying enough this way? Aren’t they suggesting that truth lies in silence, that silence itself is truth? But we are unable to understand their language.

We cannot understand anything without words. Our understanding is limited to words and so they speak to us through the medium of words. They tell us in words about that which cannot be communicated in words. It is their compassion that leads them to attempt this impossible feat, and because of our ignorance we try to catch hold of their every word. Words coupled with ignorance form a sect – and once again we are deprived of truth and true religion is as distant from us as ever.

You must rise above words. Only then will you know what is behind the words. Words only fill our memories. Knowledge does not come from them. And please don’t mistake memory for knowledge. Know once and for all that memory is nothing more than a record of the past. It is learning, not knowledge.