Osho – Whatever you live unconsciously becomes a hangover 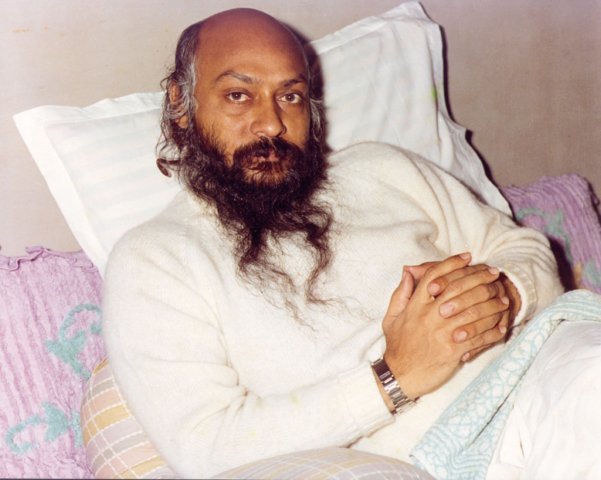 Osho – The first thing to remember is how to drop thoughts and become thoughtless — thoughtless but alert, because in deep sleep also you become thoughtless, and that won’t do. It is good for the body, that is why after a deep sleep your body feels rejuvenated. But the mind remains tired even in the morning, because the mind continues its activity. The body relaxes, though it too cannot relax totally because of the mind; but still, it relaxes. So in the morning the body is okay, at least workably okay — but the mind feels tired, even in the morning. You go to bed tired, you get up in the morning more tired because the mind was continuously working, dreaming, thinking, planning, desiring; the mind was continuously working.

In deep sleep for a few moments when you are absolutely unconscious you become one. This same oneness is needed with a conscious and alert mind. As you are in deep sleep — no thought, no distinction of good and bad, heaven and hell, God and the devil, no distinction of any sort, you simply ARE, but unconscious — this has to be attained while you are alert and conscious. Samadhi, the final, the ultimate, the utter meditation, is nothing but deep sleep with full consciousness. Deep sleep you attain, so the only thing to be attained is more and more consciousness. If you can add more consciousness to your deep sleep you will become enlightened. The mountain is transcended and the path opens — one thing.

Second thing: you carry the past within you — that creates multiplicity. You were a child, the child is still hidden in you, and sometimes you can still feel the child kicking; in certain moments you regress and become the child again. You were once young, now you are old; that young man is hidden there, and sometimes even an old man starts being as foolish as a young man.

You carry the whole past, every moment of it, and you have been many things! From the womb up to now you have been millions of persons, and they are all carried within you, layer by layer. You have grown, but the past has not disappeared; it may be hidden, but it is there — and it is not only in the mind, it is even in the body. If, when you were a small child and you were angry and someone said, ‘Stop! Don’t be angry,’ and you stopped, that anger is still being carried by your hand. It has to be so because energy is indestructible, and unless you relax that hand it will persist, unless you do something consciously to complete the circle of that energy which became anger in a certain moment fifty years back or sixty years back, you will carry it within you, and it will color all your actions.

Even when one becomes old he is also a child, a young man, and all that he has ever been is there, because you don’t know how to die every moment. That is the whole art of life — to die moment to moment so that there is no hangover. A relationship has finished — you don’t carry it, you simply die to it! What can you do? Something was happening and now it is not happening. You accept it and you die to it — you simply DROP IT with full awareness, and then you are renewed in a new moment. Now you are not carrying the past.

You are a child no more, but watch yourself and you will feel the child is there — and that child creates trouble! If you were really a child there would be no trouble, but you are young or old….

I have heard: Mulla Nasruddin was hospitalized. He was eighty — and then came his birthday, and he was waiting for his three sons to bring him some present. They came of course, but they had not brought anything — because he was eighty years old! A child feels happy with a present, but an old man? Eighty years old! His eldest son was sixty. So they didn’t think about it at all, but when they came and Mulla looked and they were empty-handed, he felt angry, frustrated, and he said, ‘What! Have you forgotten your old father, your poor old father’s birthday? It is my birthday!’

The child… at that moment you could have looked into his eyes, and this eighty-year-old man was not there, just a child waiting for some toys.
One son said, ‘Forgive us, we forgot completely.’
Mulla Nasruddin said, ‘I reckon I will forgive you, because it seems this forgetfulness runs in our family. Really, I forgot to marry your mother.’ He was really angry.

So they all three shrieked in unison, and they said, ‘What! Do you mean we are…?’
He said, ‘Yes! — and damned cheap ones at that!’

And this is not only true for the child, every moment of the past is there and influencing your present — your present is so loaded. And millions of voices from the body and the mind go on manipulating you; how can you reach the path? You are a mountain. This mountain has to be dissolved. What to do? It can be dissolved consciously — one thing is to live your past again, consciously.

Whatsoever you do consciously is lived through and is no longer a hangover. Whatever you live unconsciously becomes a hangover, because you never live it totally — something remains incomplete. When something is incomplete it has to be carried — it waits to be completed.

Find out… regress into the past, move through it again, because there is no other way now; the past is there no more, so if something has remained hanging the only way is to relive it in the mind, move backwards. Every night make it a point to go backwards for one hour, fully alert, as if you are living the whole thing again. Many things will bubble up, many things will call your attention — so don’t be in a hurry, and don’t pay half-attention to anything and then move again because that will again create incompleteness. Whatsoever comes, give total attention to it. Live it again. And when I say live it again I mean LIVE it again — not just remember, because when you remember a thing you are a detached observer; that won’t help. RELIVE IT!

You are a child again. Don’t look as if you are standing apart and looking at a child as his toy is being snatched. No! BE the child. Not outside the child, inside the child — be again the child. Relive the moment: somebody snatches the toy, somebody destroys it, and you start crying — and cry! Your mother is trying to console you — go through the whole thing again, but now don’t be diverted by anything. Let the whole process be completed. When it is completed, suddenly you will feel your heart is less heavy; something has dropped.

If you are conscious, you can watch. Go back. Now your father is no more but for the eyes of the memory he is still there. Close your eyes; again be the child who has committed something, done something against the father, wants to be forgiven but cannot gather courage — now you can gather courage! You can say whatsoever you wanted to say, you can touch his feet again, or you can be angry and hit him — but be finished! Let the whole process be completed. Remember one basic law: anything that is complete drops, because then there is no meaning in carrying it; anything that is incomplete clings, it waits for its completion.

And this existence is really always after completion. The whole existence has a basic tendency to complete everything. It does not like incomplete things — they hang, they wait; and there is no hurry for existence — they can wait for millions of years.

Move backwards. Every night for one hour before you go to sleep, move into the past, relive. Many memories by and by will be unearthed. With many you will be surprised that you were not aware that these things are there — and with such vitality and freshness, as if they had just happened! You will be again a child, again a young man, a lover, many things will come. Move slowly, so everything is completed. Your mountain will become smaller and smaller — the LOAD is the mountain. And the smaller it becomes, the freer you will feel. A certain quality of freedom will come to you, and a freshness, and inside you will feel you have touched a source of life.

You will be always vital — even others will feel that when you walk your step has changed, it has a quality of dance; when you touch, your touch has changed — it is not a dead hand, it has become alive again. Now life is flowing because the blocks have disappeared; now there is no anger in the hand, love can flow easily, unpoisoned, in its purity. You will become more sensitive, vulnerable, open.

If you have come to terms with the past suddenly you will be here and now in the present, because then there is no need to move again and again. Go on moving every night. By and by memories will come up before your eyes and they will be completed. Relive them; completed, suddenly you will feel they drop. Now there is no more to be done, the thing is finished. Less and less memories will come as the time moves. There will be gaps — you would like to live, nothing is coming — and those gaps are beautiful. Then a day will come when you will not be able to move backwards because everything is complete. When you cannot move backwards, only then do you move forwards.

There is no other way. And to move forwards is to reach the path: the whole consciousness moving ahead every moment into the unknown. But your legs are being pulled back continuously by the past, the past is heavy on you; how can you move into the future, and how can you be in the present? The mountain is really big, it is a Himalaya, uncharted, unmapped; nobody knows how to pass through it — and everybody is such a different Himalaya that you can never make a map, because it differs with everybody. You have your Himalayas to carry, others have their Himalayas to carry, and with these mountains, when you meet with people there is only clash and conflict.

The whole life becomes just a struggle, a violent struggle, and everywhere you can see and feel and hear the clash. Whenever somebody comes near, you are tense and the other is also tense — both are carrying their Himalayas of tension and sooner or later they will clash. You may call it love but those who know, they say it is a clash. Now there is going to be misery.

Be finished with the past. As you become more free from the past, the mountain starts disappearing. And then you will attain a unison: you will become, by and by, one.

One thought on “Osho – Whatever you live unconsciously becomes a hangover”