Osho – Whatsoever happens to you is your own doing 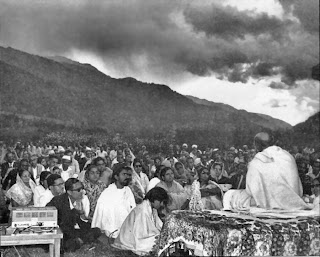 Osho – If you don’t listen to the buddhas you will be consumed by your own mischief. The harm that you do to yourself is such that nobody can do it to you; you are the greatest enemy to yourself, right now as you are. Of course you can be the greatest friend too, but you have not tried it.
All that you have done to yourself has been just a constant creation of hell, but you go on doing it, for the simple reason that you never take the responsibility on your own shoulders. You always throw the responsibility on others, on fate, on God, on the society, on the economic structure, on politics, on the state, on this, on that. You go on throwing your responsibility on others. This is a sure way to remain a slave forever. Take the whole responsibility.
When Buddha says, “You will be consumed by your own mischief,” he is saying, “Remember that whatsoever happens to you is your own doing. Good or bad, bliss or misery, darkness or light — whatsoever you reap you have sown, and you are absolutely responsible for it and nobody else.”
Giving responsibility to somebody else is becoming a slave.
Take the whole responsibility on your own self. In the beginning it is hard, it is a burden, but soon you realize: if you can create hell, you can create heaven too. Just more awareness will be needed. Hell is downhill, no awareness is needed. Heaven is uphill, more and more awareness will be needed. When you move towards the peaks, you will have to be very watchful.
People are watchful of wrong things. If you have money, you are very watchful. You go on constantly looking into your pockets. You look again and again into your suitcase to see whether the money is safe. That’s how thieves come to know that you have something. When a person constantly goes on touching his pocket, he himself is inviting thieves. He is making them aware, they are also watching. When you are hiding something, you are inviting people — it must be precious. Just throw the kohinoor diamond in the garden, and nobody will steal it. People are very watchful about wrong things, but not watchful about their inner being.
Source: from Osho Book “Dhammapada Vol 7”
Pin It