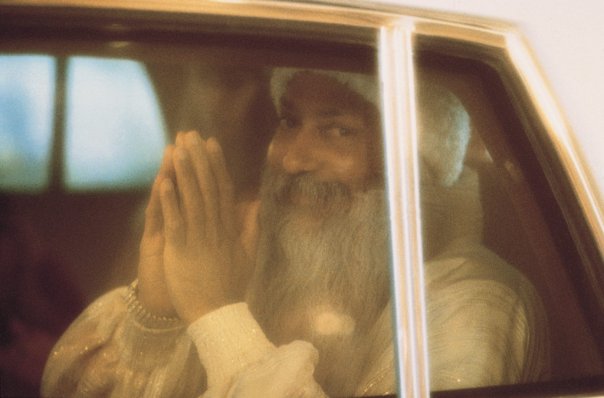 But I had to postpone, because the question was important, and the time was already 9:30. I never want to do an imperfect job, so I took the risk. I hoped for the best — that tomorrow we will be meeting — and by chance it has come true. The questioner said that within his personality, the buddha and the zorba are in constant conflict.

My whole philosophy is to bring a harmonious unity between the zorba and the buddha within every human being. But the questioner is asking only from the mind. In reality, in actual experience, zorba and buddha can never be in conflict. This has to be underlined — because in reality the zorba is completely asleep, he does not know anything about the buddha, and you cannot fight with something you know nothing about. The zorba is not even suspicious that there is anything more in life than to eat, drink and be merry. That is his whole philosophy of life, there is nothing beyond it. How can he be in conflict with the buddha? Both have to be present simultaneously to be in conflict. This is very simple arithmetic.

If the buddha has arisen in you, if that awakening has happened in you, zorba disappears. It is just like you were asleep, and now you are awake. When you are awake, sleep is no more. Zorba is the name of your spiritual sleep. They cannot co-exist. The moment you are conscious, alert, aware, the darkness of the unconscious disappears. Either there is zorba, and buddha is dormant…. Buddha is just a seed as far as zorba is concerned, it is non-existential. When buddha has blossomed, zorba disappears, just as darkness disappears when you bring the light in. You cannot have light and darkness together.

After millions of years of harassment, she finally got tired and went to God and said, “It is ungrateful to complain, but there is a limit to everything. I have been harassed for millions of years, and I cannot conceive of any fault on my part. The sun goes on expelling me from everywhere. It is even difficult to take a rest without anxiety — the sun may be coming, the sunrise may be close. I have not slept for millions of years — the anguish would not allow it. The sun has been almost a continuous torture, and without any reason. I simply want to know: what have I done wrong?”

God said, “You should have come earlier. There was no need to wait so long. This is very ungentlemanly on the part of the sun. The sun should be called immediately.”

The sun was called. He asked the messenger, “What is the problem? — because I have never done anything wrong. I simply go on doing the same routine every day. Since God made me, I have not done anything else.”

But the messenger said, “God is very angry. You have been hurting, harassing a poor woman — darkness.”

He said, “My God, I have never heard of her. I have never met her. I am not interested in women at all — I am a born celibate. I am coming, I want to see who this woman is.”

And as the sun came to the house of God, darkness disappeared.
God said, “Where has that woman gone?” They searched everywhere; darkness was not found.

Millions of years passed again, and one day the woman appeared and she said, “You have not done anything; it is still continuing, the same torture.”
God said, “You are strange. When the sun was here, where did you go?”

She said, “You are behaving like a simpleton. If the sun is here, I cannot be here; if I am here, the sun cannot be here. We cannot stand each other. You will have to hear our story separately and then decide.”

God said, “That is not my way. You both have to be present here so I can be certain that nobody is lying.”
The woman said, “Then it is better I take my complaint back.”

Since then, the woman has not appeared again. Once in a while the sun comes to inquire, “What happened to the woman — because I want to clear it up, it has become a worry on my head that somebody is being hurt by me, perhaps unknowingly.”

God said, “You need not be worried. The problem is such that it cannot be solved. I cannot give any decision unless you are both present in my court together and I have listened to both sides in the presence of each other. But by the very nature of things, you cannot both be present. That woman is your absence. So of course you cannot be present and absent simultaneously. Drop your worry. You are doing perfectly fine, and that woman is not going to report against you again. The file in your case is closed.”

Then conflict is very easy; then you can go on arguing within your mind: “How can zorba and buddha become one? They are antagonistic, they are enemies; harmony is not possible.”
Yes, in the mind it is not possible.

That’s why I am telling you constantly to go beyond mind, where it is possible — not only possible, it is already happening. Beyond mind, zorba is the buddha; there is no dividing line. All that is beautiful in zorba becomes even more beautiful when buddha arrives, everything becomes a thousandfold more glorified. And all that is wrong and ugly in zorba disappears like darkness. That which can be absorbed is absorbed, and that which is not worth absorbing is dissolved.

But don’t make it a mental problem. My approach is not of the mind, it is of meditation. It is an existential approach. The zorba loves singing, playing on his musical instruments, dancing. Buddha will make it perfect, absolute. Even silence will become a song, even stones will become sermons, and whatever you touch will become a musical instrument because your hands will now have the magic of the whole existence; they will have the grace, the beauty, the poetry….

Your life will not be a struggle between zorba and buddha, but a love affair — so deep that two lovers disappear into each other, never to separate again. The union, the harmony, the accordance is going to be eternal. But avoid the mind.
Mind knows only conflict. Even where there is no conflict, mind creates it; even where there is no problem, mind creates it. Mind cannot exist without problems; problems are its nourishment. Conflict, fight, disharmony — and the mind is perfectly at ease and at home. Silence, harmony — and the mind starts becoming afraid, because harmony, silence and peace are nothing but death to the mind.

So just shift your problem from the mind. Start living. And with me, it is easy; it has never ever in history been so easy, because I am not telling you to disown the zorba, I am telling you to live the zorba to its utmost. There is nothing to be afraid of. Only add one more thing, and that is meditation.

Meditation is the bridge between zorba and buddha. Once the bridge is complete and the buddha descends there will be a tremendous change in your zorba — all that is ugly will be gone, and all that is beautiful will be beautified tremendously.

The zorba is not going to lose anything. Without buddha, zorba is just a mundane existence. Without zorba, the buddha has no roots — only flowers. But how long can flowers live without roots? Roots are ugly; that’s why they remain hiding underneath the ground — but they are the source of life and juice. Those beautiful flowers cannot exist without those ugly roots underneath the ground; those roots are continuously nourishing them, giving their life to the flowers.

And this miracle is happening everywhere. But we are so blind that we cannot see. When you see a roseflower, you don’t see that in that roseflower is hidden the whole philosophy of life — the leaves are not red, nor are the thorns red nor are the roots red. Yet out of this green foliage comes a beautiful red rose. It is nourished by everything: by the roots, by the leaves — because the leaves are breathing constantly; otherwise, the rose would die. Branches are constantly doing a miracle — bringing juice and water from the depths in the earth upwards, against gravitation. And there is no pumping system.

Zorba and buddha are never separate. There is just one possibility: buddha can be asleep; then zorba has to live a mundane life. Or, under the stupid influence of the past, you can disown your body, become destructive of your body and try to achieve the impossible — living like a buddha without having anything to do with zorba.

I want you to be a zorba and a buddha together; then whatever is ugly in zorba will disappear on its own accord — you are not to renounce it. And whatever is beautiful will be absorbed in the new consciousness, in the new awakening. But don’t make it a mind problem.

5 thoughts on “Osho – When buddha has blossomed, zorba disappears”