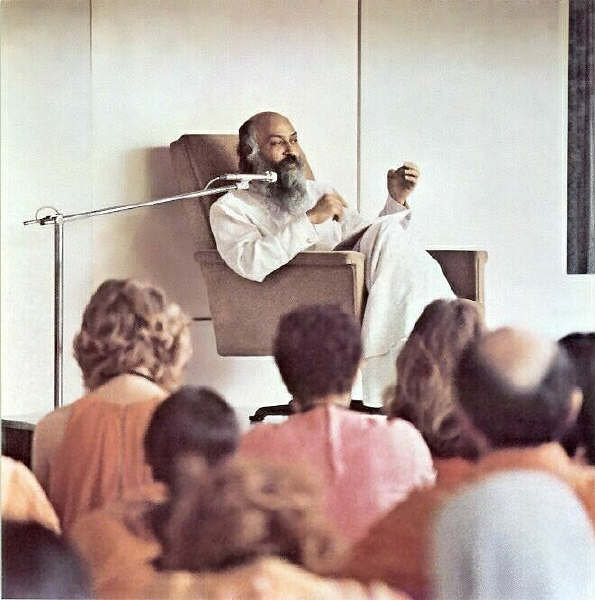 Question – Beloved Osho, i can’t conceive of you ever being unenlightened. Did you really become enlightened only thirty-two years ago?

Osho – Neither can I conceive it. This is one of the very fundamental things in the nature of enlightenment. Once you are enlightened, you are in a very strange situation – trying to conceive how you could manage to remain unenlightened for so many lives. It is a tremendous work, it needs great effort.

There is a beautiful story in Gautam Buddha’s life. Again and again he has told it…. In one of his past lives he met an enlightened being. Out of respect he touched his feet. But he was surprised – in return the enlightened man touched his feet. Buddha could not believe his eyes. He said, ”What are you doing? I am an unenlightened man, ignorant. I have not experienced truth. I have not yet been able to love, to be compassionate. My laughter is still phony, my heart is full of discontent. Why have you touched my feet?”
And the enlightened being laughed. He said, ”Don’t be worried. As far as I am concerned, you are as enlightened as I am.”

From your side, that is your problem – I don’t see any of you here as unenlightened, it is impossible. Enlightenment is your very center, your very being. But you have been conditioned, programmed to remain unenlightened. All your religions are responsible for it. They don’t want you to become enlightened, because an enlightened man cannot be a Christian, a Hindu, a Mohammedan. From his state of consciousness, all these theologies, religions, are sheer nonsense – fictions created by ignorant people for other ignorant people.

Just see the difference between these two simple words: being and becoming. Enlightenment is being – you cannot become it. Becoming is a process somewhere in the future after long journeys, doing all kinds of stupid things – yoga postures, Christian prayers, fasts, remaining celibate, entering into a monastery forever, you will not come out of it….

There are monasteries where you enter but unless you are thrown out you cannot get out; only your dead body comes out some day. I have heard about such a monastery. It was famous for two things: one, for one thousand years no woman had entered into the monastery – it was prohibited. Even a six-month-old baby girl was not allowed.

When I heard about it I thought, were monks living in the monastery, or monsters? A six-month-old baby is not allowed in! You can conceive the mind of those people who are living inside. And second, it was famous in that silence was the rule. Only after seven years – once, after seven years – if you wanted to say something to the abbot, you could say it, and then for seven years again silence.

One man became a monk. For seven years he suffered, because the mattress was missing, he was sleeping on a bare floor. It was hard, it was cold, but he had to wait for seven years to say, ”I need a mattress.”
Seven years, by and by, passed – they must have looked to that man almost like seven centuries. And he was so happy when he went to the abbot and said, ”Master, I have a complaint to make. In the room you have allotted me, there is no mattress. And for seven years I have been prohibited from speaking.”
The abbot said, ”Okay, a mattress will be provided immediately. You go back.”

A mattress was provided. But the cell in which the monk was living was very small, and the door was very small, and the mattress was big. So while they were bringing the mattress in, the door fell out and the window’s glass was broken. Somehow they forced that big mattress into the small room. For seven years the poor man again suffered – from rain, wind, snow, because there was no door and the window was broken. In fact, he started thinking that the first seven years were far more beautiful: ”I was an idiot to make that complaint!”

Again after seven years he went to the abbot. And the abbot said, ”Again?”
The man said, ”I have to say something, I am compelled to say it: the mattress that was provided was bigger than my cell, and the people, the other monks who brought it, somehow forced it in. I could not say no – I could not speak. They broke the door, they broke the window, and you can conceive – for seven years I have been living in wind, in rain, in snow. I was not thinking that I would be able to survive, but somehow by God’s grace I am here again. Please put the door back and mend the window.”

Enlightenment is a very simple understanding. So once you stop all efforts to be enlightened and just remain at ease with yourself, totally accepting yourself as you are…. That’s how existence meant you to be. Don’t try to improve upon existence, you cannot do that. Relax, be existential, not religious. And suddenly you are amazed, ”My God! I have always been enlightened.”

And when I saw myself as enlightened, I saw the whole existence as enlightened. You are part of a tremendous blissfulness, but you are keeping yourself closed. You go on doing something against nature, against existence. You have been taught that to be natural is something wrong; you feel guilty when you are natural. You feel happy when you repress your nature, when you become phony, a hypocrite. All religions have been doing only one thing for thousands of years: making people hypocrites.

I want you to drop all that crap, and just be yourself – with no effort to go anywhere, because you are already there, this very moment. I know about a man who is present amongst you, his name begins with ”T”. Forgive me, I cannot tell you his full name. I know his tent number, but I cannot tell you the tent number. He has come here to assassinate me.

I cannot tell you his name and his tent number, because I don’t want to interfere in anybody’s life. If he wants to assassinate me, and can have a moment of joy – I have had enough, so let him have the joy.

But I would like him to wait at least for the 6th of July, because I have a date with death. Whenever I die, I will die on the 6th of July. The year does not matter, but the 6th of July matters. I want it permanently to be the Master’s day. So, Mr. T., only this much favor you have to do for me.

He is trying to find ways, proper situations, spaces, places, from where he can assassinate me, and he is in much trouble. I am perfectly willing – after enlightenment what is there? All is fulfilled. I will be of every help to him. He could have approached me and asked, ”How to assassinate you?” and I could have given him exactly the right information. I could have left my bedroom door open in the night… because I don’t want that man to suffer. After assassinating me, my sannyasins will not leave him to himself. He will be killed immediately, and I am against violence. But that is the trouble he is facing: everywhere there are thousands of sannyasins – he will be caught.

I cannot even do what Jesus did on the cross. He prayed to God. There is no God, so I cannot pray. And he said to God, ”Please forgive these people because they know not what they are doing.” That too, I cannot say, because Mr. T. knows exactly what he is doing or planning to do. He just does not know how to do it. He seems to be an amateur. I feel sorry for him; perhaps he will not be able to do what he has come here for. I cannot interfere with him, I cannot interfere with my sannyasins. And my sannyasins also have guns. I don’t interfere with anybody.