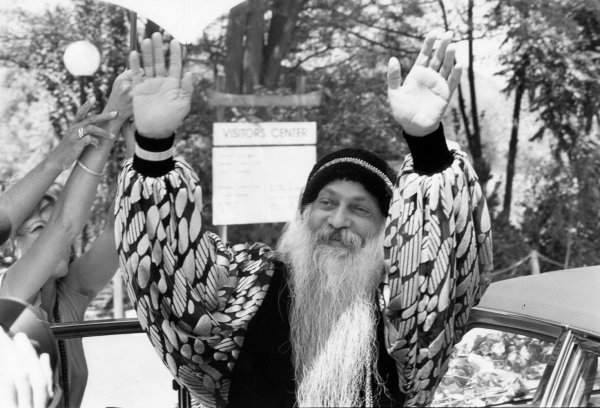 Osho – I AM A DRUNKARD. You may believe it or not, but I am a drunkard. You can look into my eyes and you can see it — I. am drunk with Jesus. And Jesus is a wine; he is not a man, he’s an intoxication. And once you have tasted of him, then nothing of this world will ever be meaningful to you. Once the meaning from the beyond enters into your life, this whole world becomes futile, immaterial, insignificant.

Religion is a sort of intoxication. This has to be understood because without a deep intoxication, your life will never have any meaning. It will remain superficial prose and will never become a poem. You will walk but you will never be able to dance, and unless you dance you have missed. Unless you dance with such abundance, with such forgetfulness that you disappear in it, that the dancer is lost and only the dance remains… only then. And only then will you be able to know what life is.

I remember: Once Alexander the Great asked Diogenes, “You are so learned, you know so much. Can’t you tell me something about God, what God is?”
Diogenes waited for a moment and then said, “Give me one day’s time.”

Alexander came the next day but again Diogenes said, “Give me two days’ time.” And it happened again, and he said, “Give me three days’ time,” and then four days and then five days, and then six days and the whole week was gone.
Alexander was annoyed and said, “What do you mean? If you don’t know the answer you should have told me before. If you know, then what is the explanation for the delay?”

Diogenes said, “That moment you asked me, I thought that I knew. But the more I tried to catch hold of it, the more it became elusive. The more I thought about it, the farther away it was. Right now, I don’t know anything, and the only thing I can say to you,” said Diogenes, “is that those who think they know God, they know not.”

God can be known only when you are not. This is the meaning when I say, “Until you become a drunkard” — so that your ego is lost. I am a drunkard, drunk with Jesus. And when I will be talking to you about Jesus, it is not about Jesus. I am not a theologian, not a Christian, not a scholar. Theologians talk ‘about’, they go round and round, they beat around the bush. I am not going to talk about Jesus, I am going to talk Jesus. And when I talk about Jesus, it is not that I am talking about him, rather, he talks himself. I give him way, I become a passage. All that I do is that I don’t hinder him. That is the only way to talk about Jesus or Buddha or Krishna. And when I will be talking Jesus I will not talk about Christ. Jesus is real, Christ is a principle. Jesus is concrete, Christ is abstract. Jesus is a man like you and me, of blood and bone. His heart beats. He laughs, he cries, he loves, he lives.

Christ is a dead concept, bloodless; there is no heart beating there. Christianity is concerned with Christ, I am not concerned with Christ. The word’Christ’ is beautiful, but corrupted, contaminated, polluted. The whole beauty of it has been destroyed. Whenever a word is used by theologians it loses meaning and purity and innocence — then it is no more virgin. Jesus is still virgin, Christ is corrupted. Christ is a concept, Jesus is reality, concrete reality.

Look! I love human beings, but not humanity. Humanity does not exist. Only concrete human beings exist — someone here, someone there, but it is always someone. Humanity is an empty word. And just like that is Christ. Jesus exists, sometimes in Gautam the Buddha, sometimes in Mohammed the prophet, sometimes in Krishna the fluteplayer — somewhere here, somewhere there, but it is always a concrete phenomenon. Christ is abstract. It exists only in the books of philosophy and theology. Christ has never walked on the earth. Or, we can say it another way: Christ is the son of God, Jesus the son of man.

God is not somewhere, always existing, otherwise God will never be fresh and young — it will gather too much dust, it will become dirty. It comes into existence whenever a man realises his sins, whenever a man really exists. Whenever a man exists in totality, God exists in those rare moments. So when you come and ask me, “Where is God?” I cannot show you. Unless you have proof of him in your own being, he will not be there. Until you become him he is not. Everybody has to realise him in his own innermost shrine, in his own being. You carry him as a seed. It is up to you to allow it to grow and become a great tree.

So I will not be talking about Christ, but about Jesus. Let Christ be imprisoned in the churches — that is the right place for Christ to exist. I would like Jesus to enter your hearts. Forget Christ, remember Jesus. But just the opposite has happened. People have forgotten Jesus and their minds have been hammered continuously for two thousand years, hammered to remember Christ. Christ cannot transform you, because there exists no bridge between you and Christ. Then there exists an unbridgeable abyss. But with Jesus you are close. You can call Jesus ‘brother’, but you cannot call Christ ‘brother’. And until you feel a deep brotherhood, a bridge, how can Jesus be of any help to you? Jesus is tremendously beautiful his beauty has a dimension of its own. Buddha is beautiful, but Jesus is totally different from Buddha. In Buddha a different type of silence was incarnated.

l have heard about a Chinese emperor. He had two great painters in his court, and there was always rivalry. They were always fighting and competing, and it was almost impossible to decide who was the greater. Both were masters of their art. One day the emperor said, “Now you do one thing: you both paint on one theme so that it can be decided who is the greater, and the theme is’Rest’.”

The first painter, of course, chose a very obvious subject: he painted a very silent lake, far away in the mountains, lone, still, not even a ripple on the surface. Just looking at that painting you would feel sleepy. The other painter tried something absolutely opposite: he painted a thundering waterfall… for miles the white foam of it… and just near the waterfall a very fragile, delicate birch tree, the branches bowing down, touching the foam, and on the birch the small nest of a robin, and the robin sitting on the nest, with closed eyes, almost wet. The first is a non-dynamic silence: more like death, less like life. The opposite doesn’t exist in it. The rest has no tension in it; the ‘rest’ is more like absence than like presence. The second is a dynamic concept:’rest’, but not dead. It is alive, throbbing. The thunder, the waterfall, the tremendous activity, and the nest, and the robin sitting there, silent….

Jesus is like the second painting, Buddha comes closer to the first painting. Of course it is very silent, but the opposite is missing — and without the opposite, music cannot be created. Buddha has a single note, he is not an orchestra.Jesus has opposite notes meeting, merging and creating a harmony, a symphony. Buddha is silent, without revolution. Jesus is silent, with a deep rebellion around him.

This has to be remembered. Only then you will understand how to penetrate into his very heart. Why did Jesus become so significant, why did he appeal to so many people all through these centuries? — he has something of the wild in him. He is not a garden, he is a wilderness. He is raw, not refined. You touch him and you will know. You feel him and you will know. Buddha is very cultured, very refined. He has something of the court of a king. Jesus comes from a village, a carpenter’s son, uneducated, uncultured. He is like a wilderness: raw, but alive, rebellious. Hence, the appeal; hence he has touched millions of people’s hearts. You can understand him. He is more than you but you are in him. You cannot understand Buddha. He is more than you but you are not there. With Jesus a bridge exists.