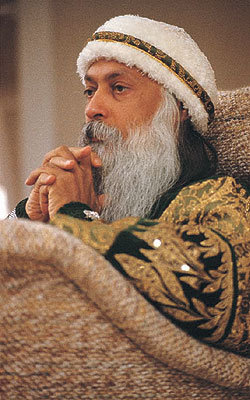 Osho – If you do not seek anything from without, you are complete, you are entire, you are perfect. The moment you start desiring something from outside, trouble starts. You have already descended from the throne of an emperor and become a beggar. And once you are a beggar, it will be very difficult to find the throne again. The world is vast and desires take you far away. Whole lives are devoted to fulfill childish desires.

One of the richest men of his time, in 1940 … I was a small child and my father was sick, so I was with my father in the hospital. This rich man, Sir Seth Hukumchand, had created a really great hospital in Indore. He used to come, and by chance we became friends. He was an old man but he used to come every day and I used to wait for him at the gate. I asked him, “You have so much …” Almost three-fourths of the houses of Indore were his property. And Indore is the next most beautiful and rich place to Bombay.
He said, “You are asking a strange question. Nobody ever asked me.”

I had asked him, “Why are you still creating new industries, creating new palaces? And you are becoming old. How is all this going to be of any help at the time of death?” He said, “I know, everything will remain here and I will be gone. But just a desire to be the most successful, rich man in the country keeps driving me. For no other reason, just that
everything I have must be the best.”

He has the only Rolls Royce in the whole world made of solid gold. It was never driven, it was just for show, standing in front of his beautiful palace. He has the best horses in the world that you can imagine. I have never seen such beautiful horses. He had a whole palace filled with all kinds of exotic things. And the reason was that he wanted to be the only owner of a certain thing. It was his absolute condition: whenever he purchases a thing, that thing should not be produced again; he should be the only owner. And he was ready to pay any money for it.

His only desire was — because Indore in those days was a state — to purchase all the houses in the state, even the palace of the king. And he almost succeeded — seventy-five percent of the houses of Indore belonged to him. Even the king had to borrow money from him, and he was giving to him very generously in order to finally settle that the whole of Indore …”He may be the king but it is my property.”

And finally a time came when he captured all the gold of India, he became the gold king of India. He purchased all the gold, wherever it was possible. And once you have all the gold in your hands, you have the whole country in your hands. If you start selling it, the prices will go down. He kept the whole market dependent on him just because he was holding the gold. And I asked him, “What enjoyment are you getting out of it?”
He said, “I don’t know, just there is a tremendous desire to be the richest, to be the most powerful.”

The inward journey begins only when you understand it clearly that anything outside is not going to give you contentment.