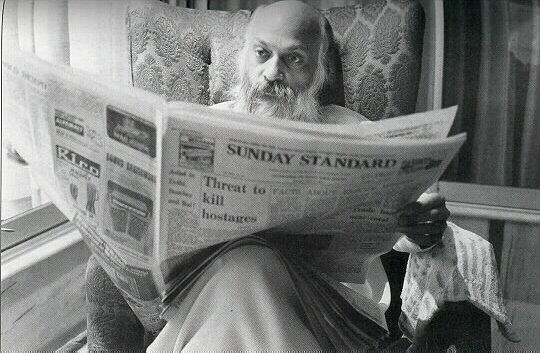 Question – Bhagwan, Why is the media so nervous around you?
Osho – Because they have never come across a man like I am. The media knows politicians, popes, other kinds of leaders. They are all afraid of the media and nervous. The politician is nervous, he has reasons to be nervous. And the journalist is assertive and aggressive, and the politician is simply dodging and trying to save his skull.

A few days ago I saw an interview with Rajiv Gandhi, who has become now the prime minister of India. He was here in America. The interviewer goes on continuously hammering and Rajiv Gandhi looks almost frozen, as if any moment his breathing is going to stop. And I can see the reason, because the interviewer tried in different ways to get Rajiv Gandhi to say something against Russia. That Rajiv Gandhi cannot do. Before coming to America, first he had gone to Russia. In fact, he must have been prepared there in Russia, what to say and what not to say, because India is almost in the hands of Russia. It is not a communist country but on the very verge. Any day it is going to become a communist country.

The interviewer was also trying to force Rajiv to say something against America. That he cannot do. In America, he has come to create more friendship, he has come to get more uranium for nuclear weapons in India, he cannot say anything against America. He cannot praise America, either, because Soviet Russia will get upset. He cannot praise Soviet Russia because America will get upset. So, naturally, the politician is nervous before the media.

I have no problem. I can say exactly what I want to say. All the media become nervous because they know they will not be able even to report the things I say, because if they take all these things to the editor, perhaps they may be thrown out of the job. They are nervous because what I am saying is also hurting their prejudices. They are human beings. First they are human beings, then they may be journalists; first Christians, then they may be journalists. And when I am hitting on Jesus they want to scream, but they cannot do that. Naturally, it becomes a nervous feeling. They forget to ask what they wanted to ask. They have never met a man like me who has nothing to lose, who can say anything, who does not belong to your society, who does not care about respectability.

Now the pope is continuously concerned that his respectability as the greatest religious leader in the world should not be affected by any statement. All his statements are prepared by other bishops, looked at by a committee, everything is edited. He is simply a spokesman, he is not speaking himself The whole church, the Catholic hierarchy is decisive. He has just to speak what they teach him, what they tell him to say.

Another fundamental reason they get nervous is that I am an absolutely free man. I don’t care about contradicting myself, so they cannot put me into a corner by saying, “You said this fifteen years ago, now you are saying that.” They cannot put me into any corner. I say forget it, to hell with those fifteen years. Whatever I am saying now is true now. Tomorrow I do not promise I will say the same thing, because I don’t bother about consistency, about respectability, about what people will think. I have no reason to be nervous, I simply enjoy their nervousness.

It is strange, something new. The table with the water is placed by the side of the person who is being interviewed. When he feels nervous he can start drinking just to do something: get busy, forget nervousness, and meanwhile he has time also to think what to say next. Here it is just the opposite. The water and everything is placed by the side of the media. And I see them plucking grapes, taking water, tossing and turning in their chair, sometimes looking at the photographer, sometimes at the director. They will never forget the interview, because that kind of interview is never going to happen to them unless they come here again, to have another nervous breakdown.

But my work is first to give you a nervous breakdown, because only from there is there a possibility of a spiritual breakthrough. Breakdown to breakthrough, that’s the whole story.

4 thoughts on “Osho – Why is the media so nervous around you?”