Osho – Witnessing means that when sex arises, stand aside and look at it 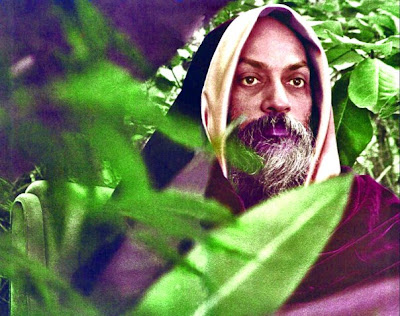 Osho – Remember this word ’witness’. This is one of the key words in the search for spirituality. If you can understand this word and practice it, you don’t need anything else. Even this one key will open all the doors of paradise. This is a master key. Any lock can be opened by it. What does it mean to stand aside? When sex arises in you, you get identified with it. Then, when you have moved through the sex act, depression sets in, because you hoped so much and nothing has happened. You longed too much, you expected too much, and nothing has happened.

The whole thing has just been a fraud. You feel betrayed, deceived. Then repentance sets in and you start thinking in anti-sex terms. You start thinking how to be brahmacharya, how to be a celibate. You think in terms of how to be a monk; you go against sex. Then you get identified with that ’anti’ attitude. Witnessing means that when sex arises, stand aside and look at it. Don’t get identified. Don’t say, ”I have become sex.” Say, ”Sexual desire has arisen in me. Now I must observe it.” Don’t be for it and don’t be against it. Remain quiet and calm – just an observer.

Move in the sex act but with a watchful eye, knowing well what is happening and allowing it to happen. Not disturbing it, not suppressing it – allowing it to become manifest in its totality, but standing aside as if you are watching someone else. The act will move to its peak. Go with it, but always standing by the side.
Know whatsoever is happening in detail. Be alert; don’t lose awareness. Then, from the peak, you will start falling down and the ’anti’ attitude will set in. Be alert again. Don’t get identified with the ’anti’ attitude. Look at what is happening: the wave has gone up to a peak; now the wave is falling down. Sex is the wave arising. brahmacharya, the ’anti’ attitude toward sex, is the wave falling down.

Be aware, be alert. Don’t be for or against; don’t condemn; don’t make any judgement. Don’t be a judge; just be a witness. Don’t say, ”This is good. That is bad.” Don’t say anything. Just be alert and watch what is happening. Be true to the facts; don’t give any interpretation. That’s what Witnessing means. If you can be a witness to sex, and to the anti-sex attitude, you will come to a great understanding.

Now, sex and anti-sex are both present to you simultaneously. This simultaneous presence of the opposites is the fight. They fight with each other, and you remain a witness. Because they are opposites, anti-poles, they destroy each other completely and both disappear. They are of the same strength and the same energy. They cut each other, they negate each other.

Ordinary persons, with ordinary, natural sex, never move to that extreme. They cannot. The energy to move comes from sex. Opposite energies are equivalent. You need not fight; you need not take part from this side or that side. That is the way of defeat. Just remain aside, get out of the circle – be a witness. It is difficult, because the mind wants to choose; the mind always chooses. Mind is the chooser because, without choosing, there will be no mind; you will fall out of the mind. That’s why it is so difficult not to choose.

But they have made a choice. They have decided that sexuality is bad and brahmacharya is good. They ask me, ”If I become a witness will I become brahmacharya, will I become celibate?” They are missing the whole point. I am saying, ”Don’t choose,” and they have already chosen. They want to use witnessing as an instrument for their choice. But you cannot use witnessing that way.

Enough misery can be created by your own sexuality. Why be concerned with others? But that misery doesn’t seem to be enough for you so you go on collecting what others are doing: who is doing wrong and who is being good. Who are you to decide? From where have you been given the right? Who are you to become a policeman?

The man who came to see me was a policeman. He was suffering because of what everyone else was doing. But I told him, ”Don’t be worried about others. The real problem must be within you. You have not yet come to terms with your sexuality, that is the problem. Why suffer because of others?

Why create other problems? Just to escape from your own problems? Just to be occupied? Who has appointed you to be a policeman? Why waste your life? You must be deeply sex-obsessed; that’s why you are concerned with others.”

So he said, ”You have touched the right wound. I am now sixty-five, and I am still suffering. As I become older, I suffer more. It seems that sexuality is growing with my age. The energy is less, but the sexuality is more. As death is coming near I feel to be more and more sexual. My whole mind, for twenty-four hours, is obsessed with sex.”

I told him, ”You have been fighting sex continuously.” He is a great seeker. He has remained with so many saints, so many gurus. I told him, ”They have destroyed you. You have reached nowhere. Whatsoever you have been doing is wrong. Now, don’t fight sex anymore.”

The man became afraid. He said, ”I have been fighting sex. And this is the reason: even with fighting I am so sexual. Now you say, ’Don’t fight it!’ Then I will become completely mad.” I told him, ”You have tried fighting. Now try the other. You have reached nowhere. Now, don’t fight!” ”Then what,” he asked, ”am I supposed to do?”
I told him, ”Be a witness.”

There is no need of brahmacharya when sexuality disappears. It is part of the same game. When the disease has disappeared, what is the use of the medicine? You will throw the medicine with the disease. So I told him, ”Brahmacharya will also disappear. But remember not to choose.”
He said, ”I will try.”

One thought on “Osho – Witnessing means that when sex arises, stand aside and look at it”