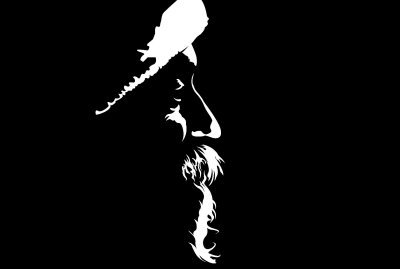 Question – Beloved Osho, What do you have to say about darkness?

Osho – I have much to say about darkness, because nobody has taken notice of the mystery that darkness is. Much has been said about light, almost nothing about darkness. But darkness is a much deeper phenomenon than light is. Light comes and goes — darkness remains; it never comes, it never goes. Light is not eternal, because it needs fuel, some kind of fuel, and the fuel will be exhausted sooner or later. Darkness needs no fuel, no cause; hence darkness is not an effect and can remain eternally there.

In the morning, you see the sun arises and there is light; in the evening the sun sets, the light disappears, and suddenly all over there is darkness. It does not mean that when the sun disappears, darkness comes in. It has been there all the time; just because of the light you could not see it. How can one see darkness while light is there? The light prevented your vision. So anytime just close your eyes and darkness is there. Anytime just blow out the candle and darkness is there.

Gautam Buddha is perhaps the only man who, for the ultimate state of consciousness, has chosen a word which can be interpreted as darkness; otherwise all the religions have talked about light, forgetting completely that light is not eternal, and if you are light, you are also not eternal. Light is dependent on something, it is caused by something.

Feeling yourself full of light may be again an ego trip. Feeling yourself identified with light, you may be simply changing your identity — but the ego remains. But blowing out the candle is blowing away the ego; and the vast darkness is bound to create in you a similar vastness of humility, humbleness, egolessness. So I love the word.

I always see light as a disturbance, and darkness as silence. But centuries of continuously fearing darkness… because it became associated with the time when man was living in jungles. The night was the most dangerous time. In the day somehow he managed to protect himself from the wild animals; he managed to kill them for his own food. But in the night he was absolutely helpless. Darkness all around, he was a victim. Any animal was capable of destroying him. In the day he could have managed to escape, to climb a tree or do something, but in darkness he was simply in the hands of wild death. So it was very easy to get a deep association between darkness and death.

All the religions depict death as darkness and life as light. It is simply the experience of man in the past when he lived in the jungles. That experience has molded his language, given it meanings. And he has not yet been able to clean those words again — because now he is not living in jungles, but still there is a certain reason why he continues to be afraid of darkness.

When there is light you are not alone, you can see everybody else. If suddenly the light goes off, the others may be there still, may not be; one thing is certain, you feel lonely. You are no more associated with the crowd. The crowd gives you a certain security, safety, a certain warmth, and you feel that you are not alone. Any danger — so many people are with you. But in darkness suddenly you are lonely, nobody is with you.

And man has not learned yet to know the beauties of his loneliness. He is always hankering for some relationship, to be with someone — with a friend, with a father, with a wife, with a husband, with a child… with someone. He has created societies, he has created clubs — the Lion’s Club, the Rotary Club. He has created parties — political, ideological. He has created religions, churches. But the basic need of all is to forget somehow that you are alone. Being associated with so many crowds, you are trying to forget something which in darkness suddenly is remembered — that you were born alone, that you will die alone, that whatever you do, you live alone. Aloneness is something so essential to your being, there is no way to avoid it.

You can befool yourself and deceive yourself; you can pretend that you are not alone — you have a wife, you have children, you have friends — but it is all pretension. You know and everybody knows that the wife is alone as much as you are alone, and two alonenesses joined together do not change the situation; instead they make it worse.

As I see it, why lovers are continuously fighting — there may be thousand other reasons, but those reasons are superficial. The basic reason is that they had chosen the other as a beloved, as a lover, to destroy their loneliness — and it has not happened. On the contrary, the presence of the other makes them more aware of their loneliness.

I used to have a very rich friend — he had a beautiful wife, children… all that one needs, perfectly comfortable, so much so that when I asked him, “Now you are fifty, and you have enough money — retire from the businesses,” he did not hesitate for a single moment. He just informed people that he is no more an active participant in any businesses, he has retired.

I was going to Mount Abu; I told him, “It is a beautiful place — “sometime you and your wife should go there. And now you are retired, you have enough time. Be there for a few weeks or months.”

He said, “You are right, we have time, but you don’t know what you have done to me. I was also thinking that when I am retired I will feel relaxed for the first time in my life. My father died when I was young, and since then I have been working continuously, becoming richer and richer. And I had a hope that one day I will retire and relax and will not have any worries of the world. And when you told me, `Now it is time — you have enough…. What more do you need? Your girls are married, you don’t have a son — for whom are you earning now? You may live twenty years, thirty years — for that you have too much. You could live with what you have for three hundred years. You retire!'”

He said, “I understood, because I have been deep down always hoping to retire, and when it came from you, I said, `This is the moment to take the jump.’ But you have created a trouble; now I am lonely. I have never felt it before. And I am so utterly lonely that I am angry at you. How can I relax in such loneliness? And if this loneliness continues, I don’t think I can survive twenty or thirty years. It is becoming colder and colder, and darker and darker. And I am feeling absolutely cut off from the world.”
“But,” I said, “you have your wife.”

He said, “That is another trouble. I had never felt so lonely in her presence as I feel now. I was so busy in my businesses that I would come home late and she was always quarreling, nagging, asking for this and asking for that. There was no time to feel each other. Now the whole day I am sitting at home, and when I see her I know: just as I am alone, she is alone. And two alonenesses do not help in any way; on the contrary they make each other more clear.”

He said, “I will come to Mount Abu, but I would like some friend to be with us; otherwise three weeks or three months, just living with my wife” — and he loved the woman — “will be too much, intolerable.”

I realized his situation and I told him, “Now, you have listened to my first advice which has created the trouble for you; but it has not created the trouble — the trouble was already there. Your businesses were just keeping you occupied so you were not aware of it — now you are aware of it. Now take my other advice: go deeper into it rather than escaping. It is your reality — there is no way to escape from it.

“It is just like your shadow — the faster you run, the faster your shadow runs. Wherever you go, the shadow goes. It is simply stupid to fight with the shadow. Rather, sit silently and let the whole feel of being alone envelop you. In the beginning it may be fearsome. You may feel you are falling into an abysmal depth. It will be dark, and you may feel that it may become darker if you go deeper into it.

“But never use the word `lonely’ because `lonely’ automatically suggests the need for somebody else. `Lonely’ is a sick word. Use the word `alone’; `alone’ has a health of its own.” I told the man, “And if you can do that then there is no need for any other meditation, this will be your meditation — just be alone. Even in the crowd remember that you are alone, don’t forget it. Your whole life you have tried to forget it; now remember it.”

Behind all these layers there is a space, crystal clear — nobody else has ever passed through it; its purity is absolute. To enter that space is to enter in meditation. Feeling that aloneness, you will feel the whole existence is alone.

There is no God — that was the need of the lonely people. Those who have tasted aloneness have discarded God, hell, heaven, and every other nonsense. You are alone, the whole existence is alone: aloneness is the only reality. Yes, it is immensely dark, but darkness has a silence and darkness has a depth. And darkness has peace, and darkness takes away all your knowledge, takes away everything that you thought belonged to you. It leads you absolutely into the unknown and into the mysterious. So to me, darkness is one of the greatest mysteries in existence — far greater than light. And those who are afraid of darkness will never be able to enter into their own being. They will go round and round, they will never reach themselves.

And it has to be darkness, not light, because light comes and goes; once you have discovered the spot of darkness in you, you have discovered something that is eternal, something indestructible, something which is more than what you know of life. It is the basic substance existence is made of. But they are just two names of one thing — aloneness or darkness.