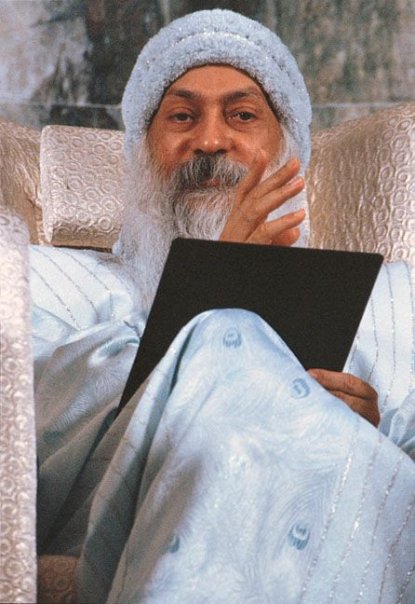 Osho – Prem means love, vatayana means now, the present moment – love now. And my whole emphasis is on this moment, because this moment contains all. Now is the only reality – all else is either memory or imagination. And even for the past to exist as memory, now is needed. It doesn’t exist as the past; it exists as a thought in the present. And so is the case with the future: the future does not exist as the future; it exists as imagination in the present moment. All that exists, exists in the now. Now is the only time there is, and to become more and more alert about now is to become aware of the presence of god.

If you think of the past, it is long: your past, then the society’s past, then humanity’s past, then the past of life on earth and then the earth’s past, and then the sun and the moon and the stars; it is infinite. And so is the future infinite: it will go on and on. Compared to the past and future, the present seems almost nothing – it is just a small point, atomic – and between these two it is almost lost track of. And that is the only reality; everything else is unreal compared to it.

Just meditate on this: you are facing a rose flower, a beautiful rose flower. It is there – the fragrance is released into your nostrils, you are delighted with it. Now bring the past in. Think of something in the past: somebody insulted you yesterday or yesteryear, or think of a childhood incident, your mother was beating you. Bring it into memory and suddenly the mind is clouded. Now you will not feel the presence of the flower so much. It is still there, the same flower, but you are no more here; you are distracted, you have become foggy, clouded. A screen of memory has come between you and the rose flower.

Or think of the future – some plan, some fantasy, something that you want to do tomorrow – and the flower fades, bows out further and further. The more deep in thought you go, the farther the flower recedes. Come out of the thought and the sky is clear, the clouds have separated and again the sunshine and again the presence of the flower; you can again smell it. While you were thinking of the past and the future the smell was still knocking at the doors of your nose, but you were not available. The colour of the flower was still coming to your eyes but you were not there. It was as if you were looking through a dark glass; things became unclear, hazy, a mist surrounded you.

Let this be the key. You have to work on it, you have to play around this idea more and more. In whatsoever you are doing, again and again pull yourself into the present. In the beginning the mind rebels, resists; old patterns are powerful, old habits go on dragging you here and there. But slowly slowly as the joy of the present becomes deepened, as you start becoming more and more saturated with it, as you see the contentment that arises out of it and the silence and the celebration, the old patterns are broken, the habits disappear.

And that day – when you start living in the present twenty-four hours a day – is the day of enlightenment. It does not mean that one will never think about the past but that one will be aware of the present. Even when a thought of the past is present in your mind, you will look at it as a present thought; you will not be dragged into the past. It will be just like a rose flower, there inside, blooming – a memory flower – but you will remember that this is the moment, the now moment. You remain centred in the now; then there is no problem.

Yes, the past can be used, and so too can the future. One has to plan – tomorrow one has to leave and the tickets have to be purchased, the journey has to be booked, but that is not the future either; that too is in the present. One remains in the present whatsoever one is doing – in memory or imagination. And once this penetrates deeply, even in dreams you will be present. You will see the dreams blooming there and you will know that this is a dream. And to know that a dream is a dream is a great experience. Then you have really come home – you are centred in your being.

Source – Osho Book “Nothing to Lose But Your Head”