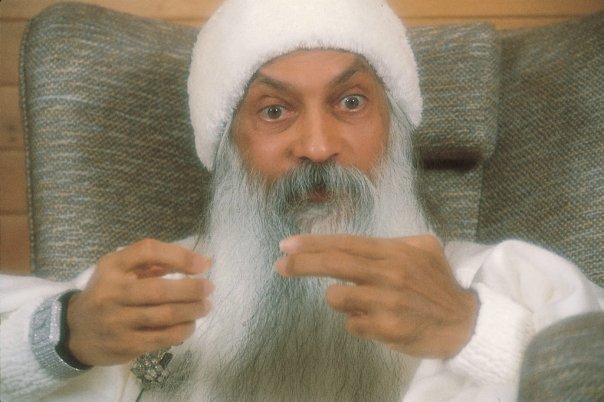 Question: Osho, Is This World Insane?
Osho : Siddhartha, IT SEEMS SO. At least up to now it has been insane. Man is not born insane but is driven towards insanity by the priests, by the politicians, by the parents, by your whole educational system, by your morality, by all that is enforced upon you, by all the conditionings. You are driven insane.

Man need not be insane, but it has not been possible yet to accept man in his naturalness. We create a structure around him, we prune him, we go on and on giving a certain form and pattern to him, we don’t allow him to be himself

And that’s my whole effort here: to accept humanity with deep respect, love, trust, so that man can regain his sanity. And the problem is that man is driven insane by your so-called well-wishers. The people who are trying to help you are the people who are poisoning you. Great mischief is being done by public servants, missionaries, by the so-called saints. They are the most mischievous people in the world — not intentionally, not consciously, but that’s the ultimate result of whatsoever they have been doing. they have been driven insane by other saints and they are driving you insane. And if you don’t follow them you feel guilty; if you follow them you become hypocrites. They don’t leave you any other alternative, only two alternatives: either be insane like them or feel guilty. And both the alternatives are ill, sickening. Siddhartha, watch life all around you and you will find in every possible way that man is insane.

When the seven-year-old started for school. his mother suggested softly, “Son, put a smile on your face and have a happy time!”
But when the lad returned home his face was a big frown.
“What happened?” his mother asked. “I thought you were going to smile and have a happy time at school.”
“It didn’t work, Mom,” he said. “I tried to keep smiling, but the teacher thought I was up to something and was always giving me dirty looks!”

Nobody wants you to be happy. If you are happy, everybody will become suspicious of you: “YOU are up to something. Why you are looking so happy?” If you are sad you are accepted — you are part of the crowd. Everybody is sad and you are also sad; it fits. But if you are dancing and rejoicing then you are crazy, mad. Then you have to be put into a hospital, you have to be treated, given electric shocks or something, because how you can be happy? How you can be so blissful? When the whole humanity is suffering, you have to suffer.

The marriage counselor was asking a woman some questions about her disposition. “Did you wake up grumpy this morning?”
“No,” she answered. “I let him sleep.”

A woman driver passed a red light and collided with another car. Jumping out of her car, she snapped at the other driver, “Why don’t you watch where you’re going? You are the third car I hit this morning!”

When a customer was told he could no longer buy his favorite patent medicine, he angrily berated the druggist.
“But I tell you, it has now been banned,” the druggist insisted. “Now you need a doctor’s prescription because it is habit-forming.”
“It is not habit-forming!” the customer cried. “I know it’s not because I’ve been taking it every day for twenty years!”

A client was complaining to a marriage counselor that his wife’s immaturity was causing his marriage to go on the rocks. “She is so immature,” he charged, “that every time I take a bath she comes in and sinks my boats!”

The elderly millionaire emerged from his exclusive club feeling despondent and hopeless, and slowly climbed into his limousine.
“Where to, sir?” asked his chauffeur.
“Drive off a cliff, James,” was the reply. “I am committing suicide!”

A leading sexologist interviewed on television was asked, “What do you think of the view that impotence is on the rise?”
“I think the question is self-contradictory!” he replied.

It is an insane world!

In old age Diogenes stopped a veteran and asked, “What were you in the last war?”
“Oh, I was only a private,” replied the veteran.
Diogenes rocked as if about to fall. “Ye gods!” he gasped. “At last!” Then after catching his breath he blew out his lantern and went home.

You think over it — it is a little difficult.

Source: Osho Book “I Am That”