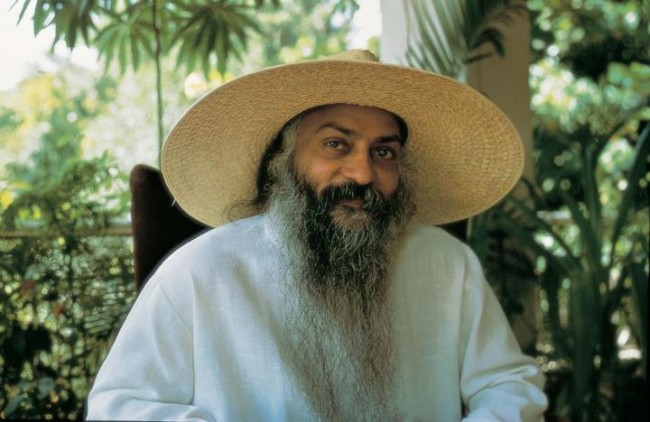 Question – Osho, can affirmations be helpful for deconditioning the mind?
Osho : Anne Halpa, Deconditioning is possible only through negations, never through affirmations. Affirmation is the way of conditioning the mind. You have to negate: neti neti. The Upanishads say: “Neither this nor that.” You have to go on negating till nothing is left to negate. When there is absolute emptiness and no content is left to be negated anymore, this is the state of a deconditioned mind.

A deconditioned mind is not a mind at all, it is a nomind. And how can you achieve a no-mind through affirmations? Affirmations mean that you are repeating something constantly, creating an atmosphere of autohypnosis. That’s what people have been doing for thousands of years. Go on telling the child, “God is. He created the world,” again and again and again — and the whole society goes on repeating it in the home, in the school, in the church — everywhere you go on repeating it — and the child becomes conditioned. Then he starts thinking as if he knows that God is. He is simply a gramophone record! It has become imprinted on his mind that God is. If he had been born in Soviet Russia the situation would have been just the opposite, because there they go on repeating, “There is no God.”

One of my friends visited Soviet Russia. He was a teacher, and he was very interested in the Soviet system of education, so he visited schools, colleges, universities — many schools. And he told me that even small children laugh at the idea of God.

Adolf Hitler in his autobiography writes: “There is only a very small difference between truth and untruth. Truth is untruth repeated many times, that’s all.”

And he is right in many ways. Repeat any untruth, just go on repeating it, and sooner or later people will start believing it. People have believed in all kinds of things for the simple reason that the people who were in authority were believers, they believed in these things. If they believed in God, then the masses believed in God. People look up to the authorities: the priests, the politicians, the rich people, the scholars, the professors. If they are all believers, then there must be a God. If they believe that there is no God, then the masses start following them. The masses are simply imitators. And the society — every society — creates a certain atmosphere of conditioning. No society exists in the world yet which does not live through this process of conditioning.

And the whole process of conditioning is harmful, poisonous, because it destroys the freedom of the individual. It destroys his capacity to inquire into truth. It destroys his adventure into life. It destroys his initiative to explore what is. Before he ever asks a question, the answer is imprinted upon him. And the people who go on doing this have vested interests. The priests would like you to believe in God. The communists would like you not to believe in God. There is nobody who is interested in you; they are all interested in their vested interests.

It happened: A disciple of Bokuju would again and again bring his new experiences — that he had experienced energy rising in his spine — and he would be beaten. And Bokuju said, “Get out of here! Don’t bring such nonsense to me! You are not it. You are the watcher who watched the energy rising. So don’t get identified with it, otherwise it is again a new identification, a new ego: the birth of a new ego, a spiritual ego, which is far more dangerous than ordinary egos.”

Then he came one day and said, “You are right. Now I am seeing great light. I am full of light, all is light!”
He was beaten again and he was told, “You are not light either, you are the watcher. Who is seeing the light? You are the seer.”

And it went on this way again and again for years. After ten years he came really happy, fell at the feet of the Master and said, “Now you will be happy with me — no need to beat. I have experienced nothingness!”
And this time the Master was so angry! He threw him physically out of the window — of a two-story house. He fell on a rock, and the Master looked from the window and said, “How are you feeling now?”

And the hit was so hard that it really brought him to his senses! He started laughing. Lying down there on the rock he started laughing. The Master also jumped from the window, embraced the disciple and told him, “Now I am happy, really happy!”
The other disciples asked, “What has transpired? It is so mysterious!”

Bokuju said, “To say,’I have experienced nothingness,’ is wrong because then you have made an object of nothingness. Nothingness has again become your affirmation — a thought, a content. You have to get rid of nothingness too! When he laughed, then, in his laughter, I could see nothingness. There was nobody who was laughing, there was simply laughter — no claim, no claimer, just simple laughter, pure laughter. There was nobody who was laughing.”
And that very moment the Master felt connected with the disciple for the first time. Otherwise, all those experiences were creating barriers.

It is said of Napoleon that he was defeated because of cats. The enemy general brought seventy cats in front of the army because he came to know that the moment Napoleon saw cats he went crazy. He would lose all balance, he would lose all intelligence and become very nervous.

And that was a truth, because when Napoleon was only a six-month-old child, a wild cat had jumped on his chest, and since then, although he could fight with lions, don’t mention cats! That had become a very deep conditioned reflex.

Behaviorists all over the world are trying to manipulate this process of conditioning in order to create a robot-like humanity. Skinner says that we can change the whole of humanity within a few years. There is no need for a Buddha or a Jesus or a Mohammed to change humanity — and they have not changed it. For centuries they have been teaching, and nothing has happened; humanity has remained the same. We can change humanity very easily. All that is needed are methods of conditioning people.

If you want somebody not to steal there is no need to put him into prison for ten years. That is not going to help; in fact, that will condition him to be a bigger thief than he ever was, because he will be living with thieves. He will be living with greater experts than himself and all that he is going to learn is why he got caught in the first place. Next time he is not going to commit the same mistake.

That’s why once a person goes to jail he becomes a regular. Then he comes again and again. Then the jail becomes his home — he becomes a jail-bird. He goes outside only to practice his art, and he comes back again to do the homework. The homework he does in the jail.

Skinner says there is no need to waste time, just give him electric shocks and within two, three weeks we will condition him. He will never think of stealing. Even the idea of stealing will be enough, and he will start trembling and he will fall down on his knees. Just the very idea will be enough to make him so nervous… All those electric shocks will be remembered by him.

He proposes that every vice can be dropped from humanity just by giving electric shocks or with methods like that, and all virtues can be established by giving rewards, beautiful rewards. For example, they have found that in your head there are different centers for different experiences. There is a pleasure center: when you are making love, the pleasure that you derive from it has nothing to do with your genital organs, it happens in your head. The genital organs simply trigger a process. In fact, the pleasure happens in your head, in your brain.

Now, Skinner says there is no need to go into such a long process of courtship and talking nonsense to a woman or to a man and then getting caught and married and having a thousand and one troubles. He says simple things are possible. You just have to keep a small box in your pocket which will be connected with the pleasure center in your head — without any wires, it will be a wire-less connection. So don’t be worried that people will see wires coming out of your head and going into your pocket, and everybody will know what you are carrying in your pocket! Just a small box in the pocket, and you can push the button, and suddenly you have a great orgasm and you are all smiles!

Skinner says to reward people for their virtue, for their good deeds, by manipulating their pleasure center, and then they will keep doing those things. For example, if whenever you go into the church suddenly you have great orgasms, naturally you will go more often. In fact, you will not leave the church at all! You will have to be forced to go out and do something else.

Skinner was working on a rat. He connected the rat’s pleasure center with a small box and taught the rat to push the button. You will be surprised what the rat did: six thousand times he pushed the button; until he fell dead he went on pushing! He forgot everything else. He forgot food, he forgot to drink, he forgot everything else. He just went on and on pushing — six thousand times. Poor rat! Could not bear that much joy! Died, but died in ecstasy!

This can be done to man. This is going to be done because the idea is simple, very simple, and the process is simple. And governments are bound to use it because it is easy to condition people not to do certain things and to do certain other things. Then everybody will be a saint and nobody will be a sinner. But saints or sinners, they will all be robots. They will not have any choice of their own.

Ultimately it can happen that there is no need to have your own small boxes. Just in every country’s capital — in New Delhi, in Washington, in London — the prime minister or the president holds the key. And every once in a while he pushes the button and the whole country goes into an orgasmic joy! Then everybody will be obedient. Nobody will break any commandments, nobody will go against them. And the whole country can be punished just by pushing a button, because just as there is a pleasure center in the brain there is a pain center in the brain. Just push the pain center and you are in such agony, you are in hell. But this is not going to bring freedom to humanity. This will be the destruction of all freedom and all possibility of freedom. It has to be stopped.