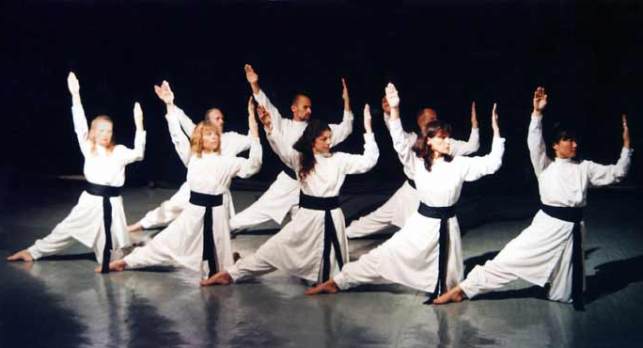 Question : Why do the sufis dance?
Osho : Yes, it is a pertinent question. Buddhists only sit silently. Why do Sufis dance? Zen people only meditate, sitting silently, not doing a thing, doing nothing — just sitting silently? spring comes, and the grass grows by itself. But Sufis dance.

These are the two different paths, because there are two types of energy in the world: the positive and the negative, male and female, yin and yang. Zen people use the negative energy; they use the passive path. Sufis use the positive energy; they use the active path. They are very vibrant people. Their meditation is not of passivity; their meditation is that of ecstasy.

If you feel that you are on the negative pole already, a passive type, then follow Zen and start moving deeply in your passivity, and one day you will reach the middle. Or if you feel that you are an active person, full of energy, youth, positivity, that sitting silently is very difficult, unnecessarily a torture, then dance, follow the Sufis’ way.

And I go on speaking on Zen and Sufism again and again so that all kinds of people are helped here. You have to choose. You have to watch yourself, your energy, and then you choose. Both are valid ways, both lead to the same goal.

Rumi says, “Hey I Drink this fine fiery wine, these needles of fire, and fall so drunk that you will not wake on the Day of Resurrection.”

The way of the Sufi is the way of the drunkard, the dancer, who becomes almost intoxicated in his dancing, who is transported through his dance. He is inebriated; his dance is psychedelic.

And remember, it is not anything that he did. It was involuntary. He started dancing; out of ecstasy the dance started flowing.

Another time, Mohammed said to Jafar, “You are like me in both looks and character. ” Here again, in wajd, Jafar started dancing. What else to do? When Mohammed must have looked into the eyes of Jafar, wajd, samadhi, was created, the transfer beyond the scriptures happened. How to receive this? How not to dance? It would have been impossible not to dance. Jafar danced.

It is said, “The enrapturing of the Sufi by God, or rather the ‘pull’ of God, keeps the Sufi continually in spiritual, inner dance and movement….” It is not that the Sufi dances — God keeps dancing in him. What can he do?”

Whenever a wave of such divine rapture strikes the heart of the Sufi, it creates great waves in the lake of his inner being….” He is just a receptacle. To say that the Sufi is dancing is not right. The Sufi is being danced. He cannot help it, he is helpless. Something is pouring into him and it is too much; it starts overflowing in his dancing and singing.

“This, in turn, causes his body to move. Upon seeing such movement non-Sufis have often supposed that the Sufi is dancing. In reality, however, it is the waves of the ocean of God that are tossing and turning the anchorless vessel that is the heart of the Sufi.”

On the surface, from the outside, the Sufi seems to be dancing. But he is not dancing, because there is no dancer. It is pure dance. God has taken possession of him. The Sufi is drunk, intoxicated. His state is that of non-being. He is anchorless. The waves of the ocean toss and turn. First his inner being is stirred, great joy arises there; and then it starts spreading towards his body.

That’s what you are doing with Aneeta; that’s what is happening to Aneeta. You are participating in something immensely beautiful in Sufi dancing. Remember it: forget the dancer and be the dance. The way of the Sufi is the way of dance, song, celebration.

Osho – You don’t have one mind; you are multi-psychic

Osho telling Sufi story of a Fakir and Pundit