Osho on Home – The being who is born homeless, and will remain always homeless 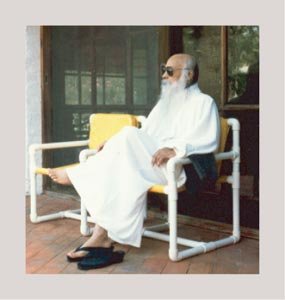 Question – Beloved Osho, What is Home?

Osho – There is no home, there are only houses. We try to make homes out of houses, but in fact, home is projection – there is only a house – it feels cold. We need a home: we want something cozy, something that belongs to us, something to which we belong. Something which is an extension of our being, something which we can make part of us; something which is not just a place where you live, but which becomes alive with you. A house is a dead thing; a home is a living entity, but it is a projection.

So those who are searching for a home will find themselves frustrated again and again because they will find again and again that it turns out to be only a house. Home was their idea. It was their illusion, their hallucination. It was their poetry, their romance. They have been weaving and spinning something invisible around the house which nobody else can see – only they can see it. But it is just Man is born homeless, and man remains his whole life homeless. Yes, he will make many houses into homes and he will get frustrated. And man dies homeless.

Just think, if people were born with a home, they would be born imprisoned. To be homeless is to be free. It is freedom. It means there is no attachment, no obsession with anything outside; that you are not in need of getting some warmth from the outside, but that your warmth is within you. You have the source of warmth inside; you don’t need it. So wherever you are – without a home – you are strangely at home.

The people who are searching for a home are always getting into despair, and finally are going to feel, ”We have been cheated, life has cheated us. Somehow it gave us the desire to find a home – and there is no home at all, it simply does not exist.”

We try in every possible way: one finds a husband, one finds a wife, one brings children into the world…. One tries to create a family – that is a psychological home. One makes, not a house, but tries to make it almost a living entity. He tries to make a house according to his dreams – that it is going to be a fulfillment of warmth, that in this coldness…. And it is vast, the coldness of existence. The whole universe is so cold, so indifferent, that you want to create a small shelter for yourself where you can feel that you are taken care of, that something protects you… that it is something that belongs to you – you are an owner, not a homeless wanderer.

But in reality this kind of idea is going to create misery for you because one day you will find that the husband you have lived with, the wife you have lived with – is a stranger. Even after living together for fifty years, the strangeness has not disappeared; on the contrary, it has deepened. You were less strangers on the first day you met.

Who is with you? Nobody is with anybody. You are in a crowd always, but alone. Either alone or in the crowd makes no difference: either in a home or just a wanderer – it makes no difference. I have never had a home. When I left my father’s house for the last time, I told him, ”I will not be coming back again, because this was only a commitment to my maternal grandmother. She had a promise from me that I would come back at least at the time of her death. So just to keep the promise, I have come. Now there is no longer any commitment.”
My father said, ”You always say strange things – this is your home!”

I said, ”That’s where we differ. Neither is it my home nor is it your home. But you continue to live in an illusion and one day you will understand that this is not home.” And I told him a famous Sufi story I have told many times.

The king heard one night the sound of footsteps, somebody walking on the roof of his palace. He could not believe it. The palace was so well guarded – how had somebody reached the top?
He shouted, ”Who are you?”
And the man on the roof shouted, ”You should ask it of yourself first: who are you?”

The king rushed out and called the guards to catch hold of the man, but he was not found. And the next day, again there was a stranger. But the king recognized the voice – it was the same man. And the strange behavior that he had shown the night before… to walk on the roof and then to talk in such a way, and to say to the king, ”First you should ask, who are you? You don’t even know that and you are worried about me! You do your business – I’m doing mine.”

The man was fighting with the guard at the gate of the palace and saying, ”I want to stay in this caravanserai for a few days.”

The guard was saying again and again, ”You seem to be an absolute idiot; this is not a caravanserai! This is the palace of the king, his home!”
And the man said, ”Then I would like to see the man who lives in such an illusion.”
The king was listening: he recognized the voice. He called the guard and said, ”Bring that man in.”
And he asked him, ”Are you the same man who was on the roof?”
The man said, ”Yes.”
”And what were you doing there?”
He said, ”My camel was lost, so I was searching for it.”

He said, ”You seem to be really mad! Your camel was lost on my roof? Has anybody ever heard of camels getting lost on the roofs of houses? And now you are fighting with my guard and calling my home a caravanserai! This is very disrespectful to me: I am the king, and this is my home, and you have to learn how to behave!”

The stranger said, ”That is what I wanted to make clear to you, that they called this their home, and then they had to leave it behind. They could not take it with them. It is a caravanserai. This is an understanding, that many people have been here who thought it was their home, and they are all gone. You will be gone when I come next time! When so many people stay here and come and go, this is a caravanserai!”

I told my father, ”One day you will also understand that this is not home, because in this world we are born and the day we are born, we start dying. You can call your homes your graves, but you cannot call them homes, because you are only dying in them, you are not living!”

And since then I have been in many houses which people thought were my homes, and I have been telling them that they were not, that there is no possibility. It is good to understand that we are wanderers, gypsies – searching for something, certainly. But the search can either be for a home… that means some security, some warmth, some coziness, some love from the outside, from somebody else – and that is the wrong way. That is the way of the worldly man – and he always ends in misery.

A sannyasin basically recognizes the fact that the search is not for a home, the search is for: who is this being? – the being who is born homeless, and will remain always homeless. Don’t search for the home, because there is none. Search for your self, because there is one! And finding that one, suddenly, miraculously, the whole existence becomes your home. And you don’t create it, you don’t project it, you don’t make it. Suddenly it is a revelation. You cannot believe how you have been missing it up to now. The home was always where you were.

The gypsies have a better name in the Indian language. The gypsies are basically from Rajputana in India. They got the name ”gypsy” because they first went out of India to Egypt and from Egypt they entered Europe. It is Egypt that gave them the name ”gypsy” – from Egypt. But they are really people from India, and in India their name is ”khanabadosh.”

That name has tremendous beauty. It means a person whose home is on his shoulders; so wherever he goes, he is always at home. The word khanabadosh is tremendously significant: khana means ”home”, badosh means ”on your own shoulders”.

It is not visible, it is there, but it is revealed only to those who can find who this wanderer is, who this seeker is. Rather than going after the sought, search for the seeker. And finding the seeker, you suddenly find the whole existence is your home; wherever you are, you are at home, even in a hotel. Because every house is a hotel and every place is a caravanserai.

So it is a question of how you look at things. When I was in India, I was at home; when I was in America, I was at home. When I am in Nepal, I am at home. And tomorrow I don’t know where life may take me, but wherever it takes me, I will be at home. That, nobody can take away from me for the simple reason that I am not making any projection which can taken away. Just finding yourself, you find that the whole existence is your home.